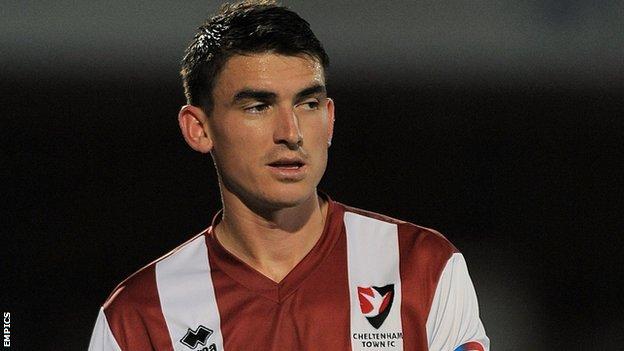 Defender Billy Jones was released from his contract at Cheltenham because he could no longer contribute to the team, says manager Mark Yates.

Jones, 30, signed for the Robins from Exeter last summer and made 46 appearances during the 2012-13 season.

But he has not played a game this term and the League Two club announced on Monday his deal had been terminated by mutual consent.

"It's a deal that suited all parties," Yates told BBC Gloucestershire.

"The club came and put something to Billy and myself so that we could part.

"We just felt he'd hit a brick wall and didn't feel that he could contribute."

But the arrival of 25-year-old Craig Braham-Barrett from Macclesfield eventually forced Jones out of the team.

And Yates admits: "Last season took a lot out of him and he was fantastic for us.

"With a squad like ours we can't have any passengers. He's a great lad to have around but we weren't looking to use him.

"We wish Billy all the best and thank him for his time here."

And Yates hopes the 31-year-old's experience will boost his side, who have won just one of their opening five league games this season.

"I'm just trying to solve the puzzle and make us a better team as we haven't found our form yet," Yates said. "We felt we were a footballer missing.

"We need someone who is going to influence the game by getting on the ball and making things happen.

"Without Marlon Pack [sold to Bristol City] we've noticed the difference more than we anticipated.

"We need someone to spark us and get hold of the game. Hopefully David can do that."