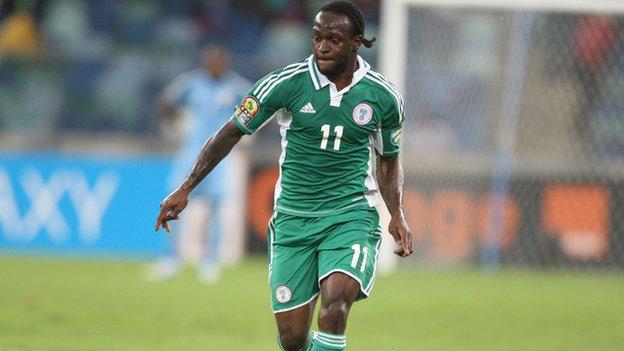 Senegal and Nigeria earned themselves a place in the draw on 16 September for the final round of African World Cup play-offs with a win over Malawi.

African champions Nigeria finished top of Group F thanks to a 2-0 triumph over 10-man Malawi.

Senegal left it late to beat 10-man Uganda 1-0 to ensure they finished top of Group J.

Here is BBC Sport's look at all the games in Groups F-J.

Only the 10 overall group winners will advance to the final round of play-offs, with the first legs played between 11-15 October and the return legs 15-19 November.

Nigeria dominated for large parts of a match played on a rain-soaked pitch in Calabar as they emerged 2-0 winners over Malawi.

The Super Eagles took the lead in the last few seconds of the first-half thanks to a deft chip from Emmanuel Emenike, the man who finished top scorer at the Africa Cup of Nations this year.

Liverpool's Victor Moses scored the second for Nigeria from the penalty spot in the 51st minute after Malawi's James Sangala was adjudged to have brought down Nnamdi Omuadi.

The Flames were reduced to 10 men a few minutes later when Mzava Limbikani was shown a second yellow card for a reckless tackle on Ahmed Musa.

Emenike should have extended the lead in the 73rd minute but somehow put the ball over the bar from inside the six-yard area.

Kenya avoided the ignominy of finishing bottom with a 1-0 win over Namibia in Nairobi.

Defender David Owino's first half goal was the difference between the two sides.

The victory ended Kenya's five-match run without a win in the 2014 World Cup qualifying competition.

Zimbabwe and Mozambique featured in a dour draw in Harare on Sunday.

The Warriors and the Mambas were both looking to register their first wins of the campaign.

Masimba Mambare fired the home side into the lead three minutes before the break but his effort was cancelled out by Maninho's second half strike.

The result means Zimbabwe pick up the group's wooden spoon.

It meant Egypt finished on 18 points at the top of the group.

Algeria had also secured their place in the play-offs going into the last group match and they made it five wins out of six when they beat Mali.

On Sunday, Rwanda travelled to Benin in search of their first Group H victory.

But the Wasps returned empty-handed following a 2-0 defeat in Cotonou.

Mickael Pote and Bello Babatunde ensured the home side ended their campaign on a victorious note.

The Indomitable Lions beat Libya 1-0 in a winner-takes-all showdown in Yaounde.

Aurelien Chedjou headed home the only goal of the match in the first half.

The Indomitable Lions went into the match knowing a draw would be good enough thanks to yet another ineligible player - this time Togo's Alexis Romao, who should have been suspended but played when the two teams met in June.

Togo won the game on the day but Fifa overturned that result and awarded Cameroon a 3-0 win that leapfrogged them above Libya to the top of the group.

The overturned result meant that Togo went into their final game looking for their first win in the group.

The Hawks recorded a 2-1 over the DR Congo, thanks to a stoppage time goal from Backer Aloenouvo.

It was also the last match for coach Didier Six who leaves after a tumultuous time in charge of the team.

Senegal scored in the 84th minute to beat 10-man Uganda 1-0 and seal their place in the play-offs.

Uganda played most of the match with 10 men after Godfrey Walusimbi was shown a straight red card in the 36th minute for a bad foul on Gassama Lamine.

Senegal built pressure in the second-half and former Manchester United striker Mame Biram Diouf causing Uganda's defence a lot of problems before he was forced off with an injury in the 75th minute.

This after against Ivory Coast last year.

Angola finished their World Cup qualifiers on a high with a comfortable 4-1 win over visiting Liberia.

Guedes gave the Palancas Negras an early lead as he scored after just 11 minutes.

Mabululu, Guilherme Afonso and Abdul were then all on target in the second half before Marcus Macauley grabbed a consolation for Liberia.