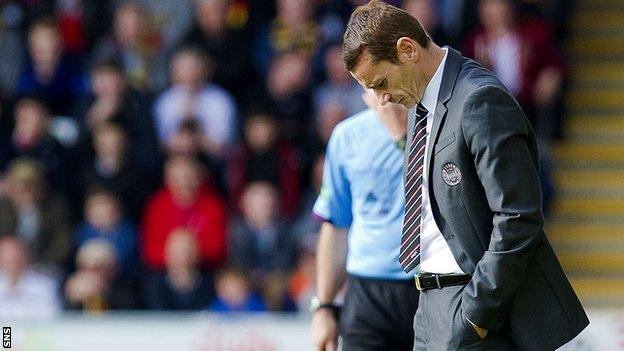 The Paisley pressure is piling down on Danny Lennon and the post-international break match with Motherwell has become massive for the St Mirren manager in his battle for backing.

Not just the support of the Saints' board of directors who've so far pulled back from pressing the panic button - Lennon needs the players and supporters on his side as well.

We're talking about a team which, inside the last six months, lifted the League Cup - a first major trophy success in 26 years. But don't forget Kilmarnock were the previous winners of the same prize and that didn't stop the subsequent sacking of Kenny Shiels.

I've no wish for the likeable Lennon to get the same treatment but he doesn't need me to tell him that's exactly what will happen if he can't snap his side out of a long-running Hampden hangover.

Since that momentous cup win, St Mirren have won only one of thirteen games, five of them this season, including an immediate end to their trophy defence in Dumfries against Queen of the South.

They've picked up just one Premiership point so far and only Hearts' handicap - the -15 points administration penalty they started with - stands between Saints and bottom spot. That was a position they were too close to for comfort at the end of last season as well.

So what's gone wrong with a team boasting promising youngsters such as Kenny McLean, Conor Newton and John McGinn in addition to established talent like Paul McGowan and Steven Thompson?

Are the players culpable for the collapse which followed one of the greatest moments in club history? Or are they failing to deliver because they've lost faith in Lennon's leadership and the manager's methods?

The answers lie inside the St Mirren dressing room and out on the training ground.

Lennon's post-match interviews don't offer many clues. He's mild-mannered and philosophical about a horrific run of results. Maybe he should let out a blast of anger sometimes and give a public display of the football passion he plainly possesses.

I reckon the St Mirren fans would welcome some straight-talking from the manager as their grumbles of discontent threaten to escalate into something more sinister.

There still has to be hope that Lennon can stop the slide but he's in urgent need of a win to boost his job security.