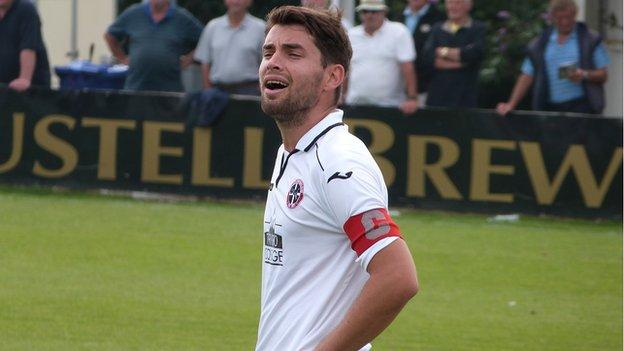 Truro City boss Steve Massey paid tribute to the performance of Jake Ash, after the club captain grabbed a last-gasp equaliser against Hitchin.

Massey played Ash, usually a defender, out of position as a striker for the 1-1 draw on Saturday.

"We have to stop these last-minute equalisers. It's no good for my grey hair," he told BBC Radio Cornwall.

"Luckily, 'captain marvel' appeared on the scene to grab the equaliser. Jake has got a wise old head."

Ash scored in the fourth minute of injury time to rescue a point for his side.

Massey added: "Sometimes it worked with Jake winning the flick-ons and knocking balls into channels, sometimes it didn't because of his rustiness as a striker.

"He'll say himself he probably should have scored more.

"Young Lewis Coombes is a really good prospect and is going to be a really good player and has worked tirelessly, but I just thought I'd give him a rest this week.

"What I was most concerned about was the quality of the performance - results will come if we keep playing well.

"The icing on the cake was to grab a point. Their manager showed great dignity to tell me that we've got a good side here and it was a fair result.

"It speaks volumes about what we're trying to do."