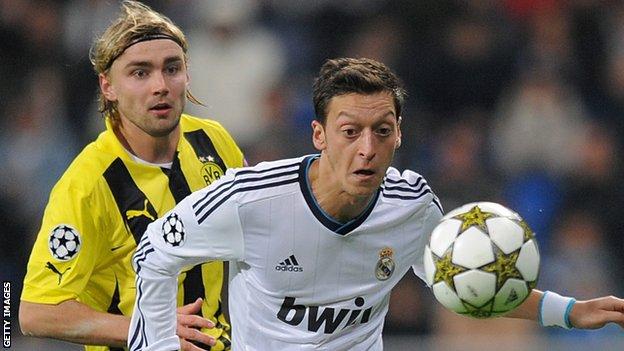 Arsenal have completed the £42.4m signing of Real Madrid and Germany midfielder Mesut Ozil to break their club record by £27.4m.

"I am thrilled to be joining a club of the stature of Arsenal and am looking forward to playing in the Premier League," he said.

The Gunners have also signed Palermo goalkeeper Emiliano Viviano, 27, but talks have broken down with Chelsea to sign striker Demba Ba, 28, on loan.

Ozil, who has Turkish parents, on his footballing ability: "My technique and feeling for the ball is the Turkish side to my game. The discipline, attitude and always-give-your-all is the German part."

"It will be great for my own personal development as a player and I am particularly looking forward to working with Arsene Wenger," Ozil told Arsenal.com.

"From our negotiations it is clear the club has huge ambition and I look forward to being part of an exciting future."

Arsenal have failed in high-profile attempts to sign Liverpool striker Luis Suarez and Gonzalo Higuain, a former team-mate of Ozil at Real Madrid, this summer.

But they have now captured Ozil after Gareth Bale's world-record £85.3m switch from Tottenham to Real triggered further deals on the final day of the transfer window.

The move easily surpasses the £15m they paid Zenit St Petersburg for Andrey Arshavin in 2009.

Arsenal manager Wenger said: "He is a great player, with proven quality at both club and international level. We have watched and admired him for some time as he has all the attributes I look for in an Arsenal player.

"I have said throughout the summer that we have been working hard to bring in top quality players to this football club.

"This has involved many many people across the club and I have always had the full support of the club in making decisions on the football side."

Germany international Ozil joined Real from Werder Bremen three years ago for a fee believed to be about £12.4m and has played 155 times for the club.

But the signing of Ozil, who helped Real win La Liga in 2011-12 and was named in Uefa's team of the tournament at Euro 2012, delivers a signal of intent to the Gunners' Premier League rivals.

Arsenal chief executive Ivan Gazidis said: "This is an exciting day for all of us. We have signed a world-class player who is one of Europe's brightest young talents.

"Mr Kroenke, our controlling owner, has always fully supported Arsene and the club in making significant investments to strengthen our squad and to bring in talented players who fit our style and ambitions.

"Like all of us, Mr Kroenke wants to see Arsenal winning titles and trophies and he has absolute faith and belief in our manager to achieve that. We will continue to work towards that goal and look forward to an exciting season."

Ba, meanwhile, has played just 15 times for Chelsea in the Premier League since joining from Newcastle for £7m in January.

His only appearance under Jose Mourinho this season was in the 2-1 home victory over Aston Villa on 21 August, when the Senegal international was substituted, but the Blues have informed Arsenal they will not loan him to a rival.

Viviano has been brought in as a back-up option to first-choice goalkeeper Wojciech Szczesny.

An Italy international, he stood in for the injured Gianluigi Buffon during the Azzurri's initial qualifiers for Euro 2012.

After impressing at Brescia and then Bologna, he joined Inter Milan but has struggled to recover his best form since sustaining a knee injury and spent last season on loan at hometown club Fiorentina.