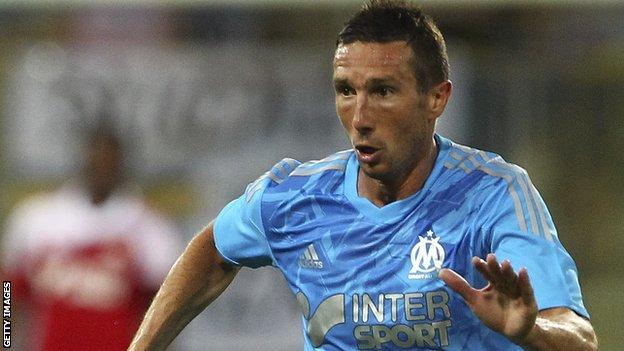 The 28-year-old has one France cap and his move to The Hawthorns includes an option to make the deal permanent.

Amalfitano joined Marseille in July 2011 from Lorient having started his career at Sedan.

West Brom are currently bottom of the Premier League with only one point from their opening three games.

Amalfitano, who made his one appearance for France against Germany in February last year, helped Marseille win the 2012 Coupe de la Ligue and finish as Ligue 1 runners-up last season, and Baggies boss Steve Clarke was delighted to bring him to the club.

"Morgan is a technical player with good quality on the ball," said Clarke. "He also has a fantastic work-rate and we believe his game is well suited to the Premier League.

"He is predominantly a right-sided midfielder who can also operate in a number of other midfield and attacking positions."

Camp, who was a free agent, has made 349 league appearances during spells at Derby, Burton, QPR, Nottingham Forest and Norwich and also has nine caps for Northern Ireland.

His signing comes after West Brom goalkeeper Ben Foster was ruled out for up to 12 weeks after suffering a stress fracture in his foot.

Goalkeeping coach Dean Kiely has welcomed the addition of Camp, who started one Premier League game for Norwich last season and came on as a substitute in two further matches.

"Lee will bring experience and authority to the goalkeeping department," said Kiely.

"We have acted quickly in the wake of Ben's injury and made a really good signing."