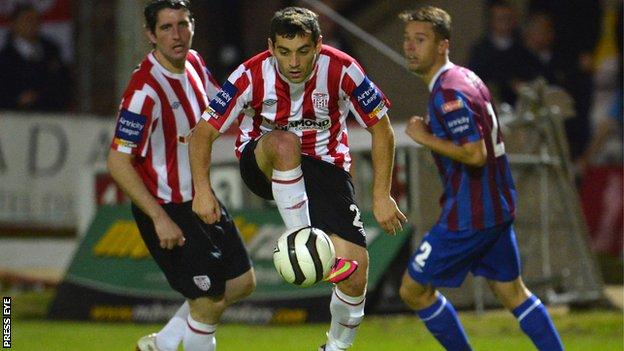 St Patrick's went ahead in the early stages and rarely looked like conceding as they leapt back above Dundalk to the summit of the table.

Derry have now taken one point from their last six league games at home and their title hopes have disappeared.

Former Candystripe Brennan curled an outstanding free-kick off the inside of a post from 20 yards after two minutes.

Rory Patterson's first-time shot wide from a Simon Madden cross that evaded the away defence was as close as Derry came in a first half entirely dominated by the Saints.

The Foylesiders improved after the break but when they did get a sight of goal, substitute Patrick Kavanagh saw his shot easily saved by Brendan Clarke.

Barry Molloy fired over the bar from 30 yards as City pressed to get back into the game, but St Pat's easily saw off 10 minutes of injury time to go two points clear at the top.

The result means Derry's hopes of European football are fading fast as they slipped five points behind third-placed Sligo Rovers, who were held to a 1-1 draw by Drogheda United.