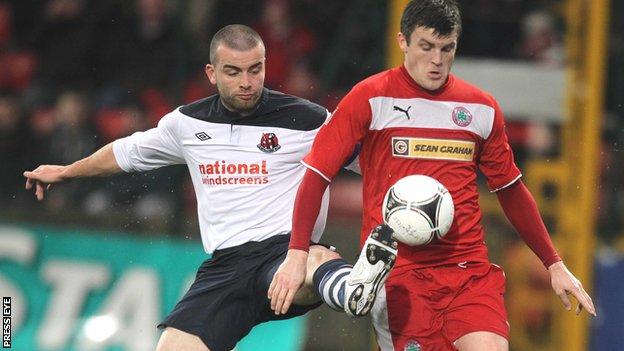 Crusaders welcome back skipper Colin Coates for the Premiership encounter against Dungannon Swifts at Seaview.

The central defender has served a two-match ban after his red card against Ballinamallard last month.

Portadown moved up to second after beating champions Cliftonville on Friday and they face a trip to Ballymena United on Tuesday night.

"We're delighted with our season so far but we never get is easy at Ballymena," said Ports boss Ronnie McFall.

I will be at the Ballymena Showgrounds with Liam Beckett as the Sky Blues host a Portadown side high on confidence after their win over champions Cliftonville.

Warrenpoint welcome bottom club Linfield in our main commentary game while there will be reports from Tuesday night's other three Premiership matches.

He added: "Ballymena seem to be up and down - well capable of beating anyone but leaking goals in other games."

Gary Twigg scored the Portadown winner at Solitude and Sky Blues manager Glenn Ferguson is wary of the damage the striker can inflict.

"Portadown have a good squad and probably the most lethal striker in the league at present in Gary Twigg," said Ferguson.

"He's good so we'll have to be on our toes and we know it's going to be a difficult game."

Warrenpoint Town host struggling Linfield although the basement Blues can leapfrog their newly promoted opposition if they secure a first league win of the campaign.

"It's the first occasion in all my time at Linfield that we have been bottom of the league - it's only four games in and we will not be there for long," manager David Jeffrey told the club website.

Ards will be aiming to build on Friday's 2-0 victory over Ballymena when they take on Glentoran at the Oval.

Ballinamallard lie third after an impressive start to the season and Glenavon provide the next test for the Co Fermanagh side at Ferney Park.

"Glenavon have an extremely good side, they've signed some experienced players but also players with a lot of quality," said Mallards boss Whitey Anderson.

"This will be a tough game but all games in this league are tough.

"We go into the match in a good vein of form and there is a confidence about us."