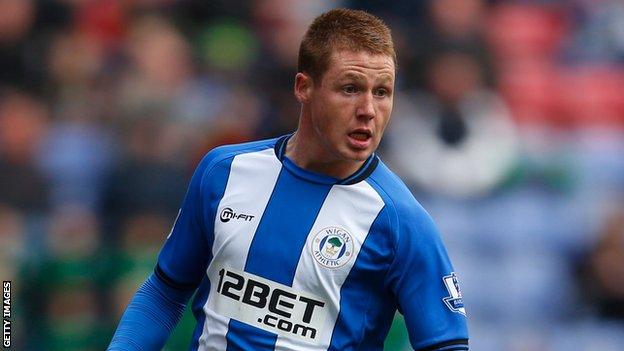 Wigan Athletic have rejected a bid in the region of £10m from Everton for midfielder James McCarthy, according to Latics chairman Dave Whelan.

The FA Cup holders have also turned down a bid of about £2.5m from Crystal Palace for winger Callum McManaman.

"I hope James stays with us, but I've said I won't stand in his way," said Whelan of the 22-year-old Republic of Ireland international.

"We are waiting to see what happens at Everton, which is a difficult position to be in," added Whelan.

McCarthy, who has played 16 times for the Republic, has been linked with a move to Goodison Park to fill a possible void left should Toffees midfielder Marouane Fellaini move to Manchester United.

But Whelan said he fears that, as Monday's transfer deadline draws closer, his manager Owen Coyle will have less chance to find a replacement.

"We rejected the bid because it's still not near the value we'd expect," added Whelan.

"If we have to sell James then we will have to bring someone in and that's not easy. I really hope he stays with us. Everyone seems to leave the business until the last minute."

Palace manager Ian Holloway has repeatedly expressed his desire to sign a winger in recent weeks and, despite capturing Jimmy Kebe from Reading on Saturday, has enquired after McManaman, who impressed for Wigan in the Premier League last season.

However, Whelan says Wigan have no interest in selling the 22-year-old, man of the match in their FA Cup final win over Manchester City in May.

"He is a great talent with a bright future and we think we can develop him. He's going nowhere."