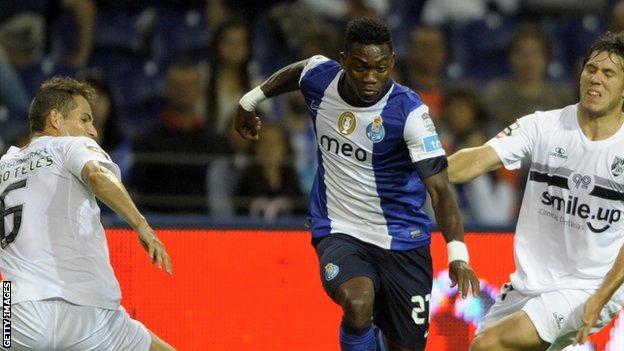 Chelsea have completed the signing of striker Christian Atsu for a reported £3.5m from Portuguese champions Porto.

The Ghana international, 21, has signed a five-year deal at Stamford Bridge but will spend the rest of the season on loan to Dutch side Vitesse Arnhem.

Atsu made 17 appearances for Porto last season, including eight in the Champions League.

It has also emerged that Liverpool will pay Chelsea around £1m to take winger Victor Moses on a season-long loan.

Atsu scored on his debut for Ghana in 2012 and featured in the Africa Cup of Nations earlier this year.

Having begun his football education at the Feyenoord Academy in Ghana, Atsu was signed by then Porto coach Andres Villas-Boas in 2010.

He was immediately loaned out to fellow Portuguese side Rio Ave.

Two goals in his first four outings for Ghana earned him the nickname the 'Ghanaian Messi'.

Atsu was quick, however, to play down any comparisons with the Argentine.

He told BBC Sport last Septemeber: "Messi is my idol. There's no Ghanaian Messi, there is no other Messi in this world."

"I can never play even 1% of what Messi is doing. It's impossible."