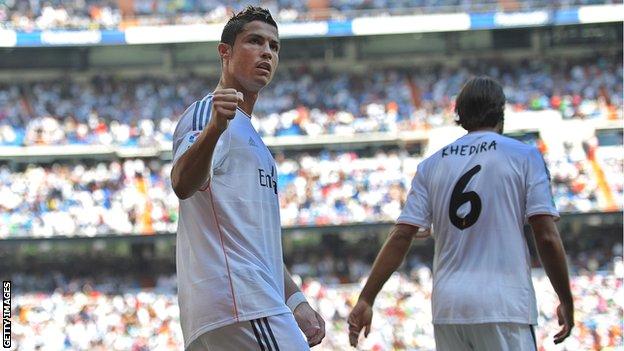 Cristiano Ronaldo and Isco scored for Real Madrid as they beat Athletic Bilbao 3-1 on Sunday.

Karim Benzema set up Isco for the opener and Ronaldo headed home to double their advantage.

Isco, a £23m summer signing from Malaga, scored his second, again from a Benzema assist, and Ibai Gomez got a consolation for the visitors.

Bilbao left out star midfielder Ander Herrera, 24, who is a target for Manchester United.

Athletic coach Ernesto Valverde denied that leaving Herrera out had been because of the midweek approach from United.

"It had nothing to do with the bid from Manchester United. I left him out because I chose the players I thought were best suited to the game," he said.

"What I'm going to repeat is that I don't expect the club to make any moves in the transfer market tomorrow [Monday]."

Before the game Real, who have now won three games from three, had to disassemble the stage on which they expect to unveil Tottenham forward Gareth Bale as their latest signing.

Other Sunday fixtures (all times BST)