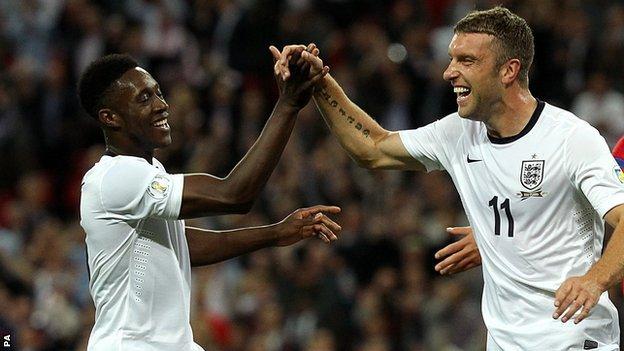 England set the platform for Tuesday's crucial World Cup qualifier with Ukraine in Kiev by securing a routine win over Moldova at Wembley.

Roy Hodgson's side now stand top of Group H after Montenegro's draw in Poland - and are a point ahead of third-placed Ukraine after playing the same number of games.

Danny Welbeck was England's spearhead with goals either side of half-time but he will miss the trip to Kiev through suspension after being harshly booked for playing on when the whistle had gone for offside seconds before the interval.

Steven Gerrard started England out on a satisfactory night's work with a superb early strike and Southampton's Rickie Lambert made it two goals in two international outings with a header before half-time.

Hodgson was able to give an England debut to Everton's exciting teenager Ross Barkley in the second half but will now be seriously concerned about his shortage of strikers with Wayne Rooney out injured, Daniel Sturridge struggling with a thigh injury and Welbeck suspended.

Welbeck's goals and all-round performance will only increase Hodgson's obvious sense of frustration that he will be unable to call on the Manchester United striker for a game that will do so much to shape England's qualifying campaign.

At Wembley a predictable pattern was established immediately as Lambert was just off target - but it took only 12 minutes for England to benefit from their early pressure.

Welbeck, used predominantly on the left flank, showed good technique to play in Frank Lampard and his short pass was drilled low past Moldova keeper Stanislav Namisco by Gerrard for his first England goal in more than three years.

Namisco's dreadful goalkeeping was a constant source of encouragement to England. He did well to block Jack Wilshere's shot after a surging run, but he was hopelessly out of his depth dealing with Theo Walcott's shot after 26 minutes, palming the ball invitingly into the path of Lambert, who scored with a stooping header.

It was hardly a taxing evening for England but there was a moment of despair for Hodgson and Welbeck just before half-time when the striker received the caution that will keep him out in Kiev for attempting a shot on goal when the whistle had gone for offside.

How did England's players perform against Moldova? See if you agree with chief football writer Phil McNulty's verdicts

The decision seemed harsh in the extreme, with Hodgson remonstrating furiously with the officials on the sidelines.

And Welbeck showed what England will be missing seconds later when he demonstrated fine technique to take Lambert's searching pass in his stride to roll in the third.

Everton's Leighton Baines replaced Ashley Cole at half-time and Welbeck's importance was emphasised even more when another clever combination with Lambert saw him lift a composed finish over Namasco five minutes after the restart.

Wilshere had taken some heavy punishment from the Moldovans and it was no surprise when Hodgson pulled him out of the action after 59 minutes, handing an England debut to Barkley.

Welbeck on the rise

Danny Welbeck, who misses Tuesday's match against Ukraine through suspension, has scored six times in his last seven England appearances, and has scored with eight of his 10 shots on target for England

Hodgson made another sensible switch with 20 minutes left. Welbeck's suspension reduced England's stock of strikers still further and he removed Lambert to keep him back for Ukraine, sending on James Milner.

Barkley had, for the most part, kept it simple, but he almost marked his debut with a goal when he was just inches off target with a powerful low shot.

Lampard, in contrast, was trying to mark his 99th cap with a goal and only the eccentricity of Namasco prevented him doing with 10 minutes left, the keeper diving the wrong way but deflecting the miefielder's shot away with his foot.

Milner should have extended England's advantage in injury time but failed to make contact with a simple far-post chance and fired off target.