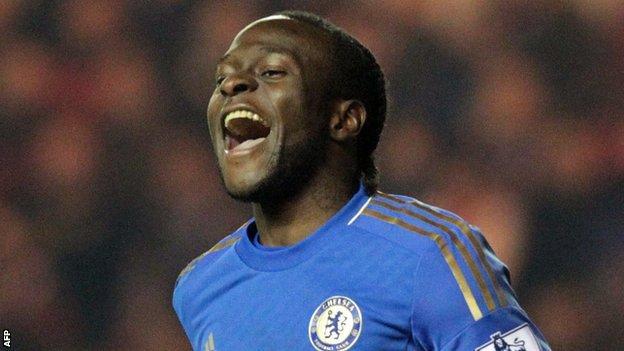 Liverpool will complete the formalities of a season-long loan deal for Chelsea's Victor Moses before the transfer window closes.

The 23-year-old has slipped even further down the pecking order at the Blues after the summer signings of Willian and Andre Schurrle.

Liverpool will pay the Stamford Bridge club a loan fee, understood to be around £1m, as part of the deal for the former Crystal Palace and Wigan attacker.

Did you know? Moses played for England at under-16, u17, u19 and u21 level before pledging his allegiance to Nigeria.

West Bromwich Albion, Southampton and Everton had also shown an interest in Moses.

Moses, who was at Anfield watching Liverpool play Manchester United on Sunday, signed for Chelsea from Wigan for a fee reported to be around £9m in August 2012.

He made 23 Premier League appearances last season, scoring one goal, but has yet to feature for new manager Jose Mourinho this season.

The Nigerian international joined Wigan from Crystal Palace on a three-and-a-half-year deal in January 2010 for a reported fee of £2.5m.

Earlier this week Liverpool agreed to sign central defenders Mamadou Sakho and Tiago Ilori for a combined fee of around £25m.

Sakho, 23, will cost £18m from Paris St-Germain with Ilori, 20, moving from Sporting Lisbon.