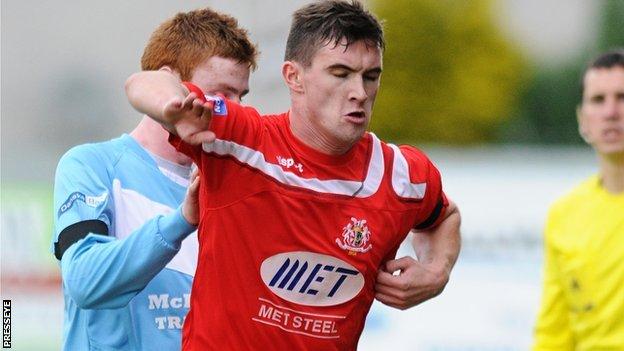 The 20-year-old was released from his contract at the end of last season after finding his first-team opportunities at Shamrock Park limited.

McLellan had been on trial at Ballymena before the 2012-13 season began but opted to sign for the Ports.

Sky Blues manager Glenn Ferguson confirmed the arrival of McLellan on a one-year contract after his bid to secure Linfield striker Matthew Tipton on loan failed to materialise.

"We've been looking at our options for around six weeks now with regards to bringing in another striker, and when it became clear Matthew Tipton wouldn't be leaving Linfield due to their growing injury list, we spoke again to Ronnie McFall about Michael," said Ferguson.

"He joined us last pre-season for a trial and we were very interested in signing him, but Portadown got him at the last minute, although he didn't get much game time during the season.

"He just wants to play football and we're delighted to be in the position to be able to offer him the chance to get into the squad and break into the first team."

Portadown lie second in the Premiership table after four rounds of matches, while Ballymena are sixth.

Meanwhile Coleraine have secured the services of Eoin Bradley from Ballymoney United.