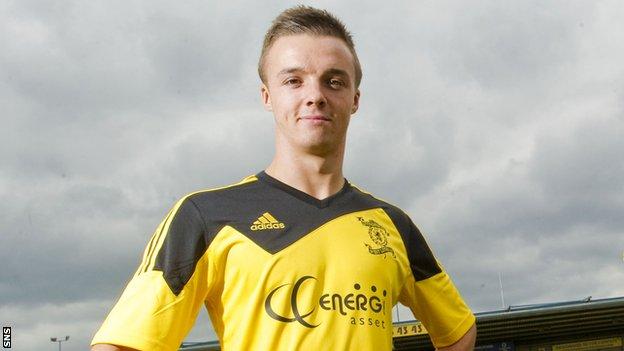 Livingston midfielder Stefan Scougall's proposed move to Peterborough United has fallen through after the deal stalled on personal terms.

United boss Darren Ferguson had been confident of concluding a deal for 20-year-old before the transfer deadline.

Livingston chief executive Ged Nixon said: "Stefan decided that that a move wasn't in his best interests at the present time."

Injury has prevented Scougall playing so far this season.

"I think we all expect him to move on at some stage," added Nixon.

"Disappointed talks broke down with Peterborough over the question of personal terms & not that I didn't want to move away which was reported. Just for the people asking.. I wasn't asking for too much. In fact everything was in place before Peterborough moved the goalposts."

"But for now he is fully focussed on getting himself back to full fitness and helping us climb up the Championship table."

On Saturday, Ferguson told the BBC that the two clubs had agreed a fee for the Scotland Under-21 international.

"We are negotiating personal terms," he said. "Hopefully we can conclude that over the weekend, because the window for ourselves shuts on Monday.

"We've got a medical arranged and all the rest of it. He's had a slight injury that's kept him out for the start of the season, but he's only young," said Ferguson.

"Great balance, good change of pace, good left foot. So a typical signing for us that we hope we can develop and improve."

Peterborough, who failed in a bid for