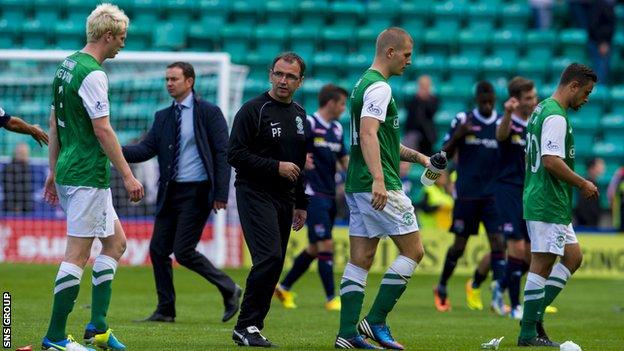 The stalemate means the Edinburgh club have gone four home games without a win this season, scoring just once.

"The players look a bit anxious at the moment but they need to deal with that," Fenlon told BBC Radio Scotland.

"We've got to be more positive and enjoy playing here."

Fenlon stuck with the same starting XI that won at Kilmarnock last weekend but there was very little for the home support to cheer.

Forwards James Collins and Rowan Vine did not link effectively and both were starved of good service from a plodding midfield.

Collins came close to netting his first goal since moving from Swindon this summer late in the first half when he connected with a Ryan McGivern cross but his header thumped against the base of the post.

"The game didn't really get going," sighed Fenlon. "There was no real tempo to the game, lots of stops for fouls and free kicks.

"I suppose it's up to us to do that but they made it difficult for us.

"We probably only had one good chance when James hit the post.

"Some of the build-up play was good but when we get into the top end of the pitch we've got to be more positive and a little quicker with our movement and passing."

Paul Heffernan joined from Kilmarnock on Friday and appeared as a late substitute.

The striker could not break the deadlock but Fenlon is sure his fellow Irishman will prove to be an important acquisition.

"He'll give us something different," he explained. "His link-up play is decent. You saw that in the small time he was on.

"He put some decent balls in and got it wide. He'll be a good addition, he has a good record of goal-scoring in this league."