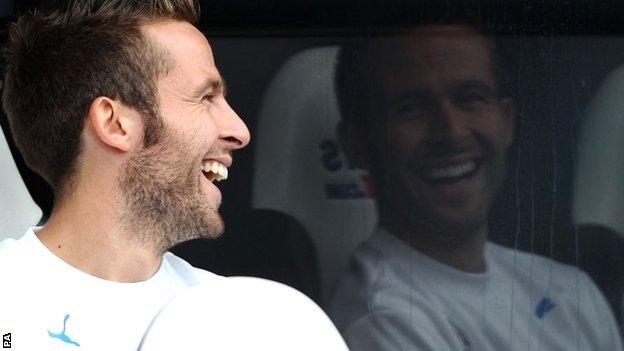 Newcastle boss Alan Pardew has said Yohan Cabaye could still leave the club despite making his first appearance of the season in the win over Fulham.

Cabaye, 27, has been the subject of a £10m bid by Arsenal and refused to play against West Ham last weekend.

But Pardew said he would not sell unless there was time to replace him.

Asked if playing meant he was staying, Pardew said: "It doesn't because the window is open until 11pm [on Monday] and all our players are vulnerable."

The Newcastle boss, whose side scored their first Premier League goal of the season to secure a first win, said he was concerned that any late bid would leave his side no time to seek alternative options - but he added there had been no further enquiries for the France midfielder since Arsenal's.

"It's a worry [receiving a late bid]," he told BBC Sport. "We've marked his agent's card that he needs to do his business early. If there is a bid to come then let us know.

"We've had no other bids yet otherwise we won't be able to replace him and we won't sell then."

Pardew also said he understood the muted reception Cabaye received after coming on in the second half.

"I thought the fans got it right - it was a mixed reaction," he said. "Some were saying to him Newcastle comes first, and others were just glad to see him because he is a great player, and I think that's about right."

But Pardew said he was happy to keep a third consecutive clean sheet, while describing Ben Arfa as a "maverick".

"You can't predict when you are going to score but what you can predict is your performance and in the second half we were terrific," he said.

"It was a frustrating day for Hatem - he did some really poor things, poor decision making and then he then he comes up with the goal and that's the maverick he is.

"You have to take the rough with the smooth with him."

"I'm really pleased for our club because the fans have had some criticism particularly from the media which I think went a little bit went too far, in terms of the reaction to the [4-0] Manchester City defeat when we were down to 10 men and we didn't have most of our offensive players available.

"But today we did and suddenly we looked a bit of a powerhouse and that's what we've got to take forward."