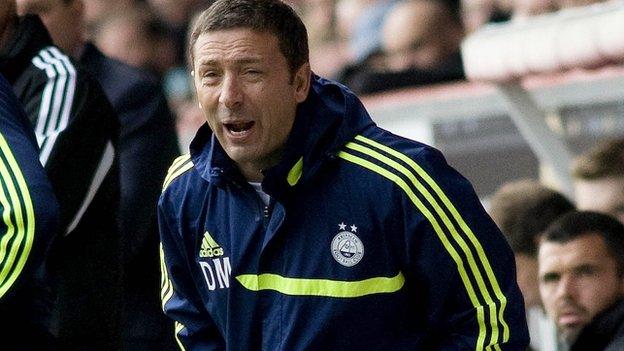 Aberdeen manager Derek McInnes has challenged his players find their scoring touch after a goalless draw with St Johnstone.

"It's up to us to come up with the answers, especially at home. I do think the answers are in the dressing room and we'll just keep working on that improvement."

After a fairly even first-half, Aberdeen dominated after the break but could not find a way past St Johnstone goalkeeper Steve Banks.

Niall McGinn came closest with an angled volley that smashed off the crossbar.

"It was a combination of poor decision-making and a very good performance from Stevie Banks in the St Johnstone goal," McInnes said.

"I thought two or three of his saves were outstanding and he more than played his part in frustrating us.

"There was far more purpose about us in the second half and we asked questions of an experienced St Johnstone team.

"If we transferred out second half performance into the full 90 minutes I think we might have had a different outcome."

The hosts were without the injured Willo Flood, Barry Robson and Jonny Hayes.

However, McInnes did not fuel newspaper rumours that he was interested in taking Celtic's Tony Watt on loan before the transfer window shuts on Saturday night.

"We're always having conversations and keeping our ear to the ground to see what's available," he said.

"There wasn't really much scope to move for us. I do believe it would be remiss of us if we weren't doing that kind of job.

"The window will shut tonight, there won't be any players coming in."