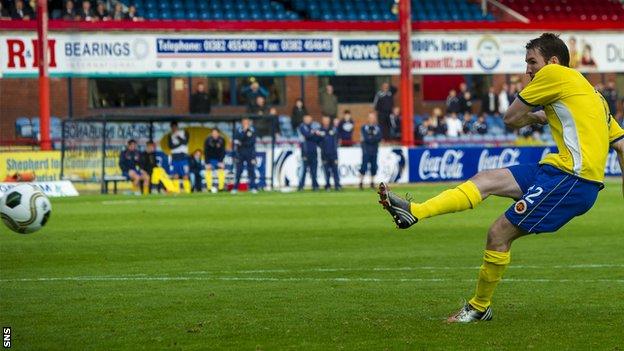 Stenhousemuir triumphed in a penalty shoot-out against Dundee to reach the semi-finals of the Ramsdens Cup.

Peter MacDonald put the hosts ahead with a second-half spot-kick after Craig Anderson fouled Jim McAlister.

But Sean Higgins struck to send the match into extra-time, which featured no further goals.

And, after Willie Dyer missed in sudden death penalties, Sean Lynch converted to win it for Stenny and book their place in the last four.

The draw for the semi-finals will take place on 19 September.

Stenhousemuir manager Martyn Corrigan: "I don't think it's the best we've played but we still managed to get through to the next round.

"For a part-time team, the boys are super-fit and I knew they wouldn't tire. The confidence was there and with penalty kicks, anything could happen.

"For us it's a big cup and I'd imagine everyone that plays in it wants to win it. You want to play in big games and we want to go as far as we can."