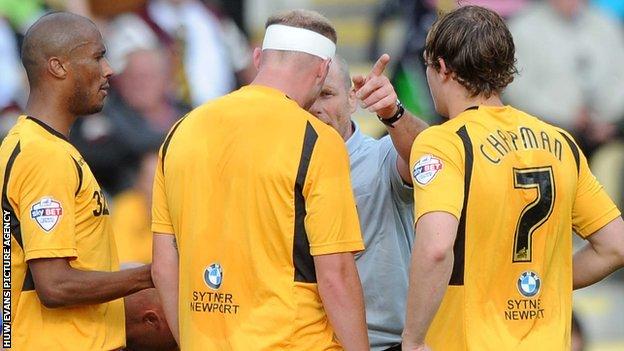 Mansfield's Sam Clucas ended Newport's 100% home record as he rescued a draw as both sides finished with 10 men.

But Mansfield got back on level terms after the break as Clucas scored from a similarly well-worked corner.

Newport's Lee Minshull was sent off for leading with his elbow on Martin Riley, but Mansfield's Matt Rhead soon followed for a second yellow card.

"I'm disappointed, not with the effort and commitment as I never doubt that from my players, but I didn't think we were brave enough or good enough in possession of the ball and that's probably the worst we've played for a long time

"Everyone got caught up in the physical side of the game and... we were 100 miles an hour and trying to get in with one pass, but I can't criticise them for the way they competed.

"It was a heated game, there was one or two incidents that were let go where I thought that if they were dealt with early on then the game wouldn't have got a little bit out of control."

"But it's a tough place to come. We would have probably taken a point before the game but I just feel we were probably worth a little bit more.

"I think we are getting better at a lot of things. The players are building a belief and spirit and we were resolute throughout the game. Alan Marriott has only had one save to make apart from the goal.

"But we found a goalkeeper in inspired form. If we just had a bit of luck up top we could have got all three points."