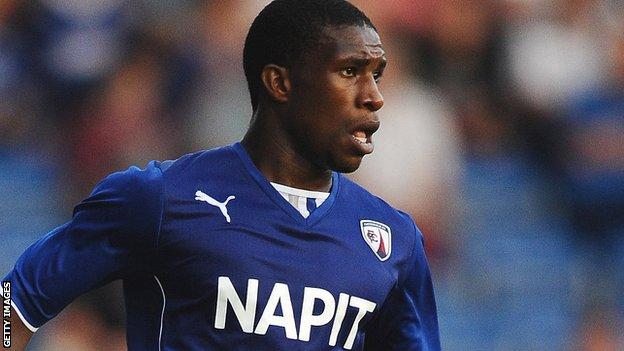 Tendayi Darikwa scored the only goal two minutes into the second period, turning in the rebound after a shot from Marc Richards had hit the post.

Richards and Sam Hird were off target with first-half efforts for the Spireites, while Stanley's Michael Richardson fired wide before the break.

Although Accrington had their moments in the game, the hosts were in control for long spells and captain Drew Talbot saw his header cleared off the line as the hosts searched in vain for a second goal.

Stanley have taken just one point from their first six league games under James Beattie.

And although the former England striker has endured a difficult start to his managerial career, his two predecessors at the Store First Stadium - Paul Cook and Leam Richardson - have guided Chesterfield to five wins and a draw from their opening six matches.

That run means Chesterfield have recorded their best start to a season in 114 years.

"Full respect to Accrington. A lot of teams will come here and try to do a job on us but we have to be patient.

"A win is a win. We are top of the league and you're there to be shot at. People say the easiest thing is to get there but the hardest thing is to stay there.

"We've got the players that can unlock teams."

"It's obviously a disappointing result but I'm delighted with the performance.

"[Chesterfield manager] Paul Cook said to me coming off that they've not had a team this season that's caused them as many problems as we did today.

"We've come to Chesterfield and been expected to get beat, but we've played some good football and we've made the team at the top of the table change their formation to accommodate us because we were causing them problems."