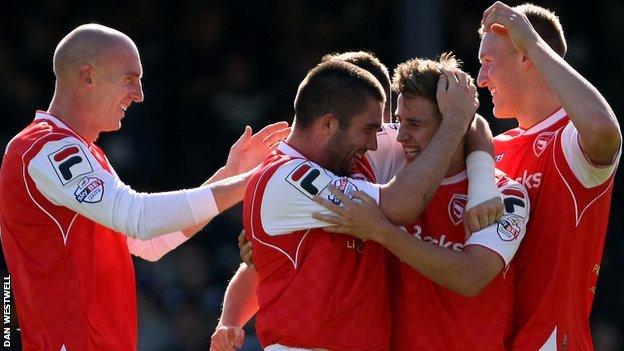 Andrew Fleming scored twice as Morecambe came from behind to stun Southend at Roots Hall.

Freddy Eastwood hit the post with a header before Kevan Hurst put the Blues ahead with a deflected strike.

But Fleming's 20-yard shot made it 1-1 and another fierce shot put the Shrimps ahead 17 seconds into the second half.

Jack Sampson added a third with a deflected long-range effort and the visitors held on despite having substitute Robbie Threlfall sent off.

Threlfall saw red for for a foul on Anthony Straker with 20 minutes remaining but Southend could not hit back to prevent a third successive defeat.

"There were too many off days for big players in our team today. I thought the first goal was going to be important, how wrong can you be?

"I'm disappointed with the defending and disappointed at the thought process and decision-making of some senior players.

"I think they've done a turn on us to be brutally honest. They slowed the game down at the right time, we were trying to play with a tempo but you can't do that when you are giving the ball away or making bad decisions.

"Consequently, that compounded in a poor second-half start and then a third goal. You are climbing a mountain then and unfortunately we didn't."

"It was a tough game because Southend have been decent at home.

"I was disappointed in our first half performance and we were fortunate to come in on level terms at half-time.

"It was the first time this season that I've properly lost my rag and maybe I've got to start doing that at the start of the game because they went out in the second half as a different team."