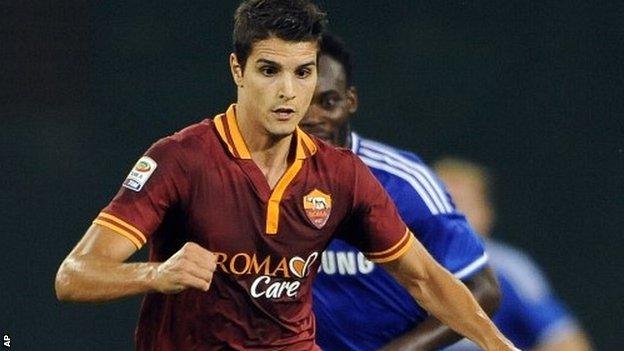 Tottenham have confirmed the signing of Argentina forward Erik Lamela after agreeing a deal with Serie A side Roma.

Roma claimed on Wednesday that the deal for 21-year-old Lamela, who has three international caps, is worth £25.7m.

It also includes up to £4.2m in bonus payments, taking Tottenham's spending to nearly £105m this summer.

Lamela joined Roma in 2011 from Argentine side River Plate and made 67 appearances in all competitions and scored 21 goals for the Italian side.

"We are delighted to announce that we've reached agreement with AS Roma for the transfer of Erik Lamela," said Tottenham on their official Twitter feed.

The deal could finally enable Gareth Bale's move to Real Madrid to go ahead for a world record fee of £86m.

Lamela arrived in London on Wednesday night when Roma confirmed a deal had been agreed, but Tottenham did not reveal the signing until Friday.

Spurs missed out on attacking midfielder Willian, 25, despite agreeing a deal with Anzhi Makhachkala and the player undergoing a medical at the club.

However, Chelsea put in a late bid and convinced the Brazilian to move to Stamford Bridge on a five-year deal.

They have also secured Danish midfielder Christian Eriksen, 21, from Dutch side Ajax for £11.5m.