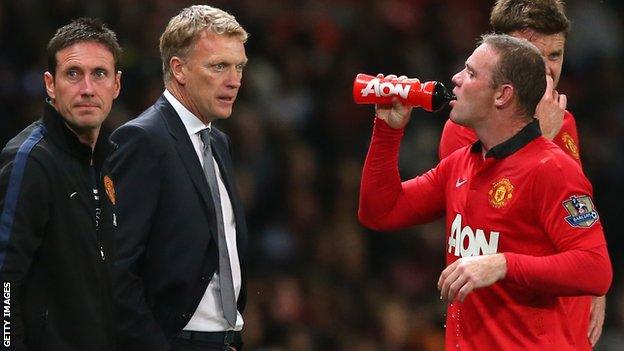 Manchester United manager David Moyes says Wayne Rooney is "mentally in good shape" ahead of their Premier League clash with Liverpool on Sunday.

Rooney, 27, has been subject to two rejected bids from Chelsea this summer amid reports that he wants to leave.

However, the England striker is not planning to put in a transfer request and has impressed in United's opening games against Swansea and Chelsea.

"He's looking in good condition and is mentally in good shape," Moyes said.

"We'll do everything we possibly can to keep that going and need him to keep performing well. At the moment, he's in good shape."

The striker was left 'angered and confused' in July after Moyes reportedly said he would not be first choice at Old Trafford this season.

United have since rejected bids of around £20m and £25m plus add-ons from Chelsea.

Rooney, who came on as a substitute in the 4-1 win at Swansea, made his first start of the season in United's goalless draw with Chelsea at Old Trafford.

The England international was given a positive reception from the home fans despite his apparent unhappiness at the club.

After the game at Old Trafford, Chelsea manager Jose Mourinho said that the England international would have to put in a transfer request within 48 hours before the Blues would make a third bid.

Rooney has not submitted a written transfer request and is in Moyes' plans ahead of their meeting with Liverpool at Anfield while Chelsea appear to have moved on with the signing of striker Samuel Eto'o.

"Wayne Rooney has been a great player for many years for Manchester United," Moyes added.

"He was an up-and-coming great player as a young boy at Everton and his career has gone the way that people expected it to go."

Moyes is still keen on adding to his squad before the transfer window closes on Monday at 23:00 BST.

However, the Scot would not be drawn on reports that United have had a bid for Athletic Bilbao's Anders Herrera rejected.

"I wouldn't disclose any names, just let the clubs deal with it and we'll try and do it in a professional manner," Moyes said when asked about the 24-year-old midfielder.

United are also interested in signing Everton duo Leighton Baines, 28, and Marouane Fellaini, 25, but Moyes refused to speak about his former players and could not guarantee that the club will make any signings before the deadline.

"It might be busy in the next few days and I hope we do a little bit of business but I couldn't guarantee that," he added.