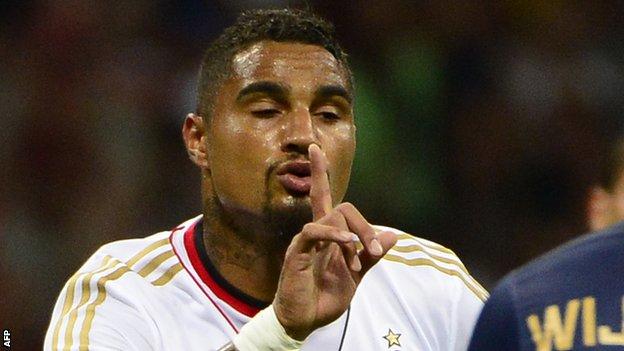 AC Milan midfielder Kevin-Prince Boateng has completed a move to German side Schalke.

Boateng, 26, who was born in Berlin but represents Ghana, scored twice in AC Milan's 3-0 win over PSV Eindhoven in the Champions League on Wednesday.

Schalke have been drawn against Chelsea, Basel and Steaua Bucharest in the competition's group stage.

Despite playing in Europe already this season, Boateng would be available for selection for Schalke.

In January he walked off the pitch in protest after being racially abused during a friendly against Italian fourth-tier side Pro Patria.

He has previously appeared for Hertha Berlin and Borussia Dortmund in the Bundesliga.

The 29-year-old scored 27 goals in 69 Serie A matches for Juventus over the past three-and-a-half seasons.