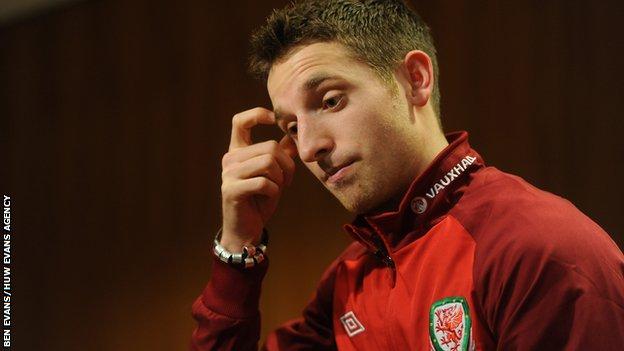 Midfielder Allen was injured playing for his club against Notts County in the 4-2 win at Anfield on Tuesday night in the Capital One Cup.

They will be replaced in Chris Coleman's squad by David Vaughan of Sunderland and Ashley Richards of Swansea City.

There were fears over Aaron Ramsey's fitness after the midfielder suffered a groin injury late on in Arsenal's Champions League win over Fenerbahce.

Ramsey finished the match on the bench but is expected to be available for Sunday's North London derby against Tottenham.

Fellow midfielder Allen limped off with a hamstring injury during Liverpool's victory over Notts County.

Defender Taylor is not included after being ruled out for four to six weeks after suffering severe bruising on his thigh during Swansea's Europa League win over Petrolul Ploiesti last week.

There is no place in the squad for West Ham defender James Collins and Sunderland midfielder David Vaughan but Brighton's Andrew Crofts and Birmingham City full-back Neal Eardley are recalled.

Manager Chris Coleman has included Gareth Bale in his squad as speculation over a proposed world-record transfer from Tottenham to Real Madrid continues to intensify.