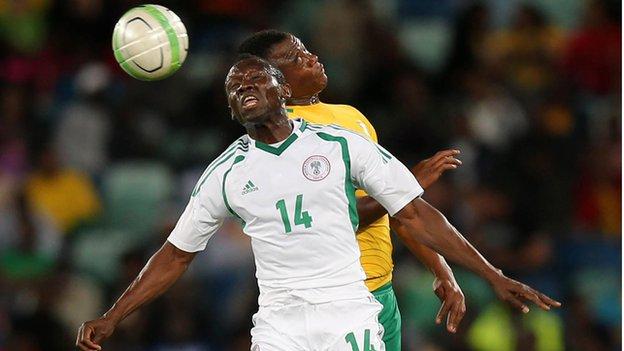 The 21-year-old Nwofor, who rejected offers from Russia and Turkey, signed after a successful medical on Friday.

He scored both goals for the Super Eagles as they beat South Africa 2-0 in a friendly two weeks ago in Durban.

"I am happy. This is an opportunity to further improve my development as a player," Nwofor told BBC Sport.

"I want to continue my football education in Holland and I believe I am at the right club. I'm excited and looking forward to working under Marco Van Basten. I believe as striker I will learn a lot from him."

A proven goalscorer at youth level with Nigeria, Nwofor joined Venlo in September 2011 and scored 13 goals in 52 league appearances for the club.

Arsenal, Tottenham and Newcastle United were all reportedly keen on Nwofor, who has been likened to Aston Villa star Christian Benteke.

BBC Sport understands that he was close to joining CSKA Moscow in January for around £4m but opted to stay in Netherlands and his agent, Tony Harris, is confident the player has made the right decision.

"But more significantly Nwofor wants to keep improving and get better as a striker. He has a chance to do that in Heerenveen.

"The club produced Ruud van Nistelrooy and Klaas-Jan Huntelaar, so he has made the right choice."