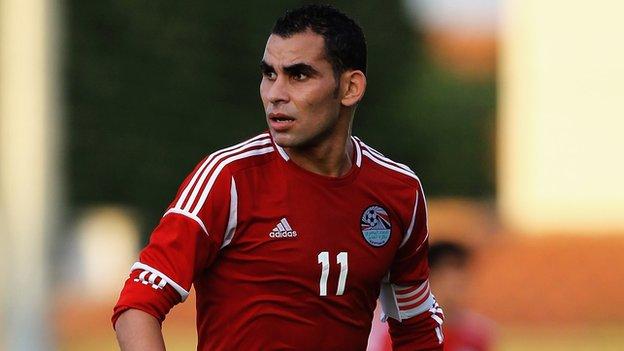 Five-time winners Zamalek played themselves back into contention in the Champions League with a 2-1 win over Group A leaders Orlando Pirates on Sunday.

And in the day's other game in Group B, Coton Sport of Cameroon secured a valuable away point as they drew 1-1 at Angola's Recreativo Libolo.

Egyptian giants Zamalek went into their match without a win in their previous 12 group games and on the verge of elimination from this season's competition.

A small but vocal crowd, who were allowed into a game that had previously been ordered to be played behind closed doors by Egyptian security officials in El Gouna, saw Zamalek win a fifth-minute penalty, successfully converted by Ahmed Eid (pictured).

Pirates, who had won 3-0 in Egypt a month ago against holders Al Ahly, came back strongly and equalised in the 33rd minute through Lennox Bacela's deflected shot.

But in the 56th minute centre-back Salah Soliman stole in unmarked at the back post to head home his first senior goal and earn Zamalek a much-needed victory and all three points.

They move up to four points, three behind Pirates, who lead on goal difference from the other Egyptian representatives, Al Ahly.

Esperance of Tunisia top Group B on nine points, two more than Coton Sport. Libolo have four and Ivory Coast's Sewe Sport, who lost in Tunisia on Saturday, are on three.

On Saturday, title holders Al Ahly secured a vital 2-1 win over AC Leopards of Congo to ensure the Egyptian's defence of their crown remains on track.

The match was played in El-Gouna for security reasons and was initially planned to be staged behind closed doors. However, kick off was delayed by 25 minutes after a scuffle between rival Ahly supporter groups, Ahly Ultras and Ahly Devils, who were allowed into the stadium.

When the match did start, it was Ahly's Abdullah El-Said who opened the scoring in the 38th minute to give his side the lead. They then made it 2-0 through Walid Soliman midway through the second half to boost their hopes of progressing from Group A.

It was a nervous finish for the Egyptian giants as Sidoine Beaullia scored for Leopards with five minutes remaining.

Esperance of Tunisia, beaten by Ahly in the 2012 final, stayed on course to win the weaker Group B with a 1-0 home victory over Sewe San Pedro of Ivory Coast.

Algerian defender Antar Yahia was the match-winner for the Blood and Gold in Tunis, nodding in at the far post from a corner by midfielder Oussama Darragi.

Sewe, who also lost by a solitary goal at home to Esperance two weeks ago, had a rare scoring chance 10 minutes from time but Kevin Zougoula headed over.