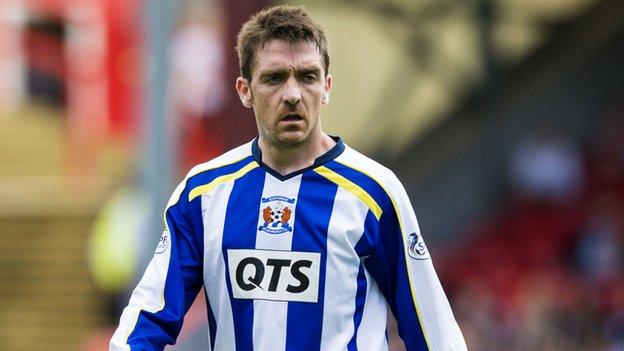 The 31-year-old Heffernan has signed a two-year contract, while 21-year-old Zoubir will be on a season-long loan.

"He is a good, experienced player and his goalscoring record is very good. He knows the league inside out."

As Heffernan switched to Easter Road on a free transfer, from Dundee United on loan.

Last season's top scorer Leigh Griffiths returned to Wolves at the end of his loan spell in Edinburgh and Fenlon has already recruited strikers James Collins and Rowan Vine from Swindon and St Johnstone, respectively.

"He's different to what we have," said the Hibs boss about his 10th signing of the summer.

"Paul comes in with a good pedigree and hopefully he will bring both goals and experience to the team."

He said he had consulted former Rugby Park team-mates Michael Nelson and Tim Clancy about the Easter Road club and had been encouraged to make the move from Ayrshire.

"It's a good club with big support - I saw that at the cup tie at Rugby Park last season - and I'm looking forward to playing for Hibs," he told the club's website.

"It's strange - I played against Hibs last weekend and this Saturday I could be playing for the club.

"But that's football - everything can change very quickly and now I'm excited about playing for Hibernian."

While Heffernan will definitely be in the squad to face Ross County, Zoubir's capture is subject to international clearance.

Injuries to Alex Harris and Paul Cairney had prompted Fenlon's search for a new wide player and Ipswich Town's Josh Carson has also been training with Hibs.