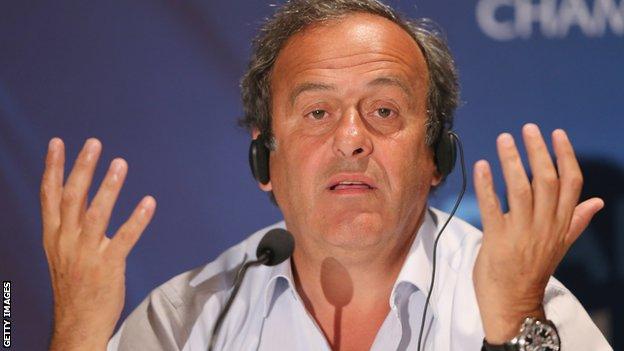 Uefa president Michel Platini has told English critics of his proposal to move the Qatar World Cup in 2022 to the winter to be more flexible.

The event's timing has been debated as Qatar's summers can be as hot as 50C.

Football Association chairman Greg Dyke has argued for a switch from June but the Premier League opposes the plan.

"I will say something to the English. We respect your calendar for 150 years - for one month in 150 years you can change," Platini, 58, said.

"I played in winter all my life, in the snow, in the rain, because of your calendar. You can change it for one month - I don't ask any more.

"In Qatar there is nobody there in June, they are all in Europe, it's 50C and you can do nothing. I have said that from the beginning and I was always transparent about that because I think it is time we take the World Cup to an Arabic country."

Premier League chief executive Richard Scudamore was adamant in his opposition when asked about it by BBC Sport this month, saying "moving it to the winter is the wrong way to go".

But there has been a less consistent message from key members of the FA.

Although Dyke hoped his own view that a summer tournament is "impossible" was shared by the rest of the organisation, predecessor David Bernstein told the BBC there should be a "rebidding process" after earlier suggesting a switch would be "fundamentally flawed".

To allay health fears over the high temperatures, officials from Qatar have said they intend to use air-conditioned stadiums and are researching the potential to create artificial clouds.

Platini will gauge the views of the European associations on the issue at a meeting in Dubrovnik, Croatia, in September. He hinted he would prefer to move the 2022 World Cup to January rather than November or December, so it did not disrupt any European club competitions.

The Frenchman also called for reform of the current transfer system. "I think transfers are a robbery," he said. "It's an opportunity for a lot of people to make a lot of money."

He acknowledged the desire from clubs to close the summer transfer window before the league season begins. This year for British teams, the market is open from the 1 July to 2 September.

He said: "I agree it is too long, but the whole world is involved and don't play at the same time as we do. The clubs also want to have transfers finished before the start of their competition."