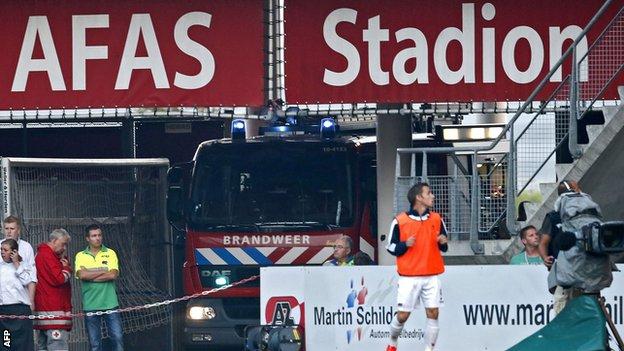 AZ Alkmaar have progressed into the Europa League group stage after the Dutch club played the remaining 33 minutes of their play-off against Atromitos on Friday morning.

The tie was abandoned on Thursday because of a fire at the AFAS Stadion.

Spectators were evacuated after the match was halted in the 57th minute, with the Greek side leading 1-0, but trailing 3-2 on aggregate.

Atromitos scored another goal on Friday, but went out on away goals.

Cypriot side APOEL have won a draw held by Uefa on Friday for all qualifying play-off losers to decide who replaces Fenerbahce. The Turkish side have been banned for two years for match-fixing.

The first signs of a problem at Alkmaar came when the floodlights failed, with the apparent cause a fire around the roof of the stadium.

AZ, who led 3-1 from the away leg, were reduced to 10 men after only two minutes when Markus Henriksen was sent off and Atromitos took the lead in the second leg through a goal from Dimitris Papadopoulos before play was stopped.

When the action resumed on Friday, Thanassis Karagounis made it 2-0 in the second leg but the Greek team could not find a winning goal as the tie ended 3-3 on aggregate, with the Dutch side advancing into the group phase.

Udinese failed to overcome a 3-1 first leg defeat in Italy as they were held 1-1 at Czech club Liberec, while fellow Serie A side Fiorentina were beaten 1-0 at home by Grasshoppers Zurich, but still went through on the away goals rule.

German giants Stuttgart were heading for extra-time against Rijeka until Goran Mujanovic struck in the last minute to send the Croatian club through 4-3 on aggregate.

Swiss side St Gallen knocked out Spartak after a 4-2 victory in Russia following a draw in the first leg.

St Etienne, from France, were surprisingly beaten 1-0 at home by Danish club Esbjerg, who had already won the first leg 4-3.