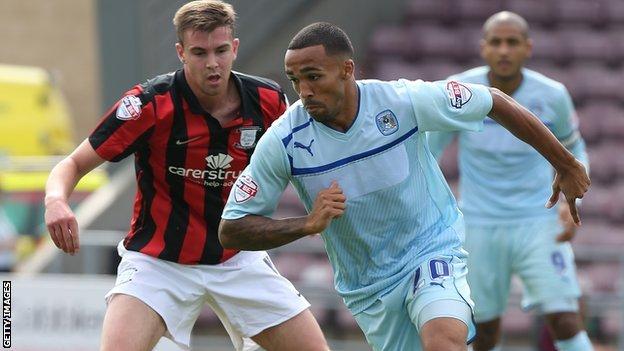 The 21-year-old, who came through the Sky Blues' youth ranks, has already scored five goals in as many games so far this season.

But Pressley told BBC Coventry & Warwickshire that they do not expect to lose any of their young players before Monday's transfer deadline.

"The only way we will sell a player is if our valuation is met," he said.

"But our valuation of our current crop of young players is very high and I don't anticipate anyone meeting those valuations.

"I would never give you an absolute assurance because teams could make that ridiculous offer I'm talking about but, at this moment, I'm very confident we'll retain our squad and if possible add to it."

Wilson made his professional debut for Coventry as a 17-year-old in August 2009 as an extra time substitute in a League Cup tie against Hartlepool.

He then spent three months on loan at Kettering the following season before a further month with Tamworth in January 2012, before establishing himself in the Sky Blues first-team squad over the second half of last season.