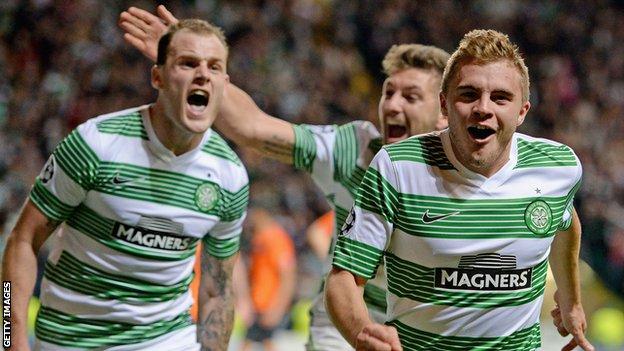 Neil Lennon described Celtic's Champions League draw as the "best and worst group" after being pitched in with Barcelona, AC Milan and Ajax.

"In terms of glamour, I don't think you could ask for anything more," said the Celtic manager.

"In terms of difficulty, I don't think you could have asked for anything more either in terms of the quality of teams we are going to face.

"We are going to be playing three wonderful football clubs."

Celtic clinched their place with a 3-2 aggregate play-off victory against Shakhter Karagandy, having beaten Cliftonville and Elfsborg in the previous qualifying rounds.

We could get no points we could 10, you just never know

Reflecting on Wednesday's dramatic 3-0 triumph over the Kazakhs, Lennon added: "For me the hard work was done last night and the last six or seven weeks and now we can enjoy it - the players can savour it and so can the supporters."

Celtic finished second behind Barcelona in last season's group stage, losing to an injury-time goal in the Nou Camp and famously beating the Catalans 2-1 in Glasgow.

Barca have been champions of Europe on four occasions and cantered to their 22nd Spanish title last season, finishing 15 points ahead of great rivals Real Madrid.

AC Milan, who were third in Serie A last term, were most recently in the east end of Glasgow in 2007 when a late, close-range finish from Scott McDonald gave Celtic a 2-1 win, while Filippo Inzaghi netted the only goal in the San Siro.

The Rossoneri, seven-time winners of the European Cup, had eliminated Celtic from the last 16 in the previous campaign.

Celtic knocked Ajax out in a Champions League qualifying tie in the 2001/02 season, having won 3-1 in the first leg in Amsterdam.

"Ajax were with Real Madrid, Dortmund and Man City (last season) and came third in the group - the group with all the champions in it," added Lennon.

"Milan have been in transition but I think they are coming on strong again. They beat a very good PSV (Eindhoven) team to qualify so their pedigree is unquestionable in this tournament.

"And we are going to see our old friends Barcelona again."

Celtic are busy adding new recruits to a squad that has lost influential trio Gary Hooper, Victor Wanyama and Kelvin Wilson and Lennon was quick to take the pressure off his team.

"I said at the beginning of the tournament it would be very difficult to emulate what we did last year," he said.

"I think qualifying for the group stages was huge for us. If we can get anything else out of it, then so be it.

"The pressure is off in terms of I don't think anyone really has huge expectations on us to qualify, although some of our fans who set very high standards will be expecting that.

"The experience of last year will stand the players in good stead.

"The new boys coming in are going to get a taste of some special occasions. We had a great night last night and have three more at least to look forward to."