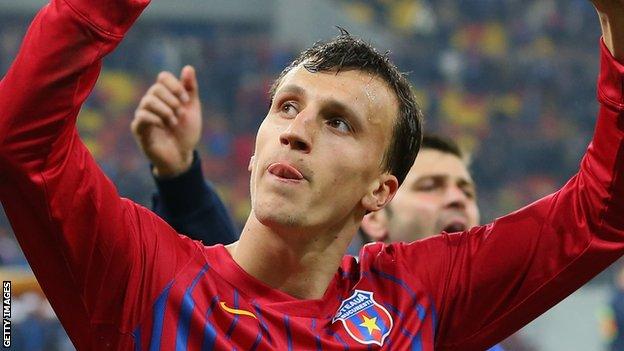 Tottenham have continued their summer spending with the signing of Steaua Bucharest centre-back Vlad Chiriches.

The Romania international, 23, has finalised a deal reported to be worth £8.5m.

In a statement, Spurs said they were "delighted" with the deal for the player, capped 19 times by his country.

Bale failed to report for training for a third consecutive day on Thursday as talks between Spurs and Real continue.

The Spanish side's vice-president Fernando Fernandez Tapias said: "There are problems but in the end I think it will happen."

According to Spanish news agency Efe, he said: "We're going to wait because [Tottenham] are dragging their feet.

"There is no doubting Bale's class, but Real Madrid without Bale is a great Madrid, we have a team of warriors."

Spurs manager Andre Villas-Boas said he may fine the Welsh international after he failed to show up on Wednesday.

Bale, 24, was due back at the club on Tuesday after a break in Marbella.

The deals for Chiriches and Lamela are irrespective of the Bale transfer, and should a deal for Argentina forward Lamela materialise, Tottenham's spending this summer will be more than £90m.

Chiriches, who made 62 appearances for Steaua, strengthens Spurs' defensive options after Steven Caulker was sold to Cardiff City and William Gallas was released.

He made his international debut in August 2011 and helped his club end their seven-year wait for the Romanian league championship last season.