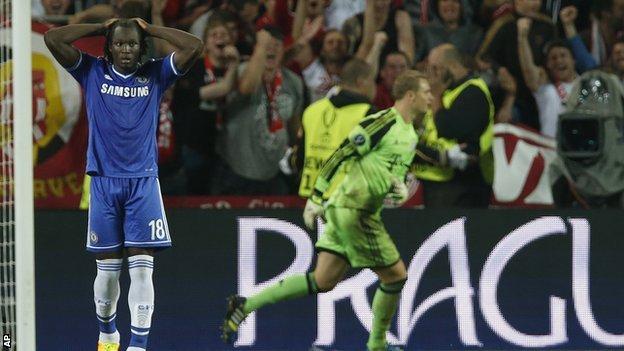 Bayern Munich beat 10-man Chelsea on penalties to lift the Uefa Super Cup and gain a measure of revenge for their 2012 Champions League final defeat.

Chelsea came within seconds of victory in extra time but Javi Martinez took the game to penalties with the last kick of the game.

Fernando Torres had given Chelsea the lead before Franck Ribery equalised.

Super Cup shoot-out as it happened

Even in defeat, this was a gritty and courageous performance typical of a Jose Mourinho side, who played the final 40 minutes with 10 men. That they came within seconds of lifting the first trophy of their manager's second spell at Stamford Bridge made defeat all the more painful.

It was a night when there had been familiarity and contempt on both sides.

Bayern had not forgotten that defeat by Chelsea on penalties in Munich. This was the first meeting since that night but the build-up had nevertheless been dominated, not by talk of Chelsea versus Bayern but by the rivalry between former Real Madrid boss Mourinho and Ex-Barcelona manager Pep Guardiola, competitors with contrasting identities.

The quality of the football ensured that storyline was a sideshow, as Mourinho and Chelsea delivered a statement of intent to the rest of Europe.

This time last season, the then European champions had been humiliated by the brilliance of Radamel Falcao in Monaco as Atletico Madrid beat them 4-1 to expose a vulnerability that ultimately cost Roberto Di Matteo his job. This was an altogether more robust Chelsea performance.

They were resolute and diligent. But there was also a flair and fluency to the game and it was Chelsea who scored first with an incisive counter-attack that was finished emphatically by Torres in the eighth minute.

Hazard created the opportunity by committing Bayern defenders and leaving opponents in his wake. He swung the ball wide to Andre Schurrle whose instant low cross was volleyed unerringly into the net by Torres with the kind of decisive first touch that has eluded him in recent times.

The Spaniard was at the centre of Chelsea's best work, twice shooting high and wide from good positions.

But the pattern of the game was established early on: Bayern were patient and progressive with Chelsea content to defend deep and break swiftly. The German champions were, however, a constant threat, especially down the left.

Czech goalkeeper Petr Cech, back on home soil in Prague, was forced low to his right to turn away Ribery's curling shot after a sharp exchange of passes with Mario Mandzukic.

The Frenchman twice shot wide of Cech's far post again before half-time but within a minute of the restart he made it third time lucky. Ribery, voted Europe's best player on Thursday, gathered a pass from Toni Kroos before striking a right-foot shot that perhaps beat Cech a little too easily from 25 yards.

The midfield battle was bruising but when Bayern did find space in the attacking areas, they broke with pace and purpose, with Arjen Robben, like Ribery, a key outlet.

The former Chelsea winger had escaped the attentions of Ashley Cole once in the first half and found Thomas Muller only for the Germany international's goalbound shot to be blocked brilliantly by Gary Cahill at the near post.

After the break, Robben went close from a well-worked free-kick.

But Chelsea kept coming. Oscar could not make the most of a slip by Dante, with just the goalkeeper to beat, he allowed Neuer back in to smother. The loose ball ran to Frank Lampard at the edge of the box but he could only volley over.

Chelsea were on top now, Neuer saved from Hazard before Ramires and Oscar went close.

David Luiz drew another impressive stop from Neuer moments later, with another header but the Premier League club's momentum was rocked soon after when Ramires was given a second yellow card and shown red for a reckless challenge on substitute Mario Gotze, whom he caught high on the left shin.

But the setback galvanised Chelsea.

Within two minutes of the start of extra-time, Hazard slipped inside Philipp Lahm and then Jerome Boateng before firing low beyond Neuer to restore Chelsea's lead.

Cech, in his home city, had one last heroic save to make, turning away Ribery's curling free-kick but with seconds remaining he was powerless to prevent Martinez poking home from close range to set up a dramatic penalty shoot-out.

After nine successful spot-kicks Lukaku, who spent last season on loan at West Brom, missed the decisive penalty with Neuer diving low to keep out the Belgian's tame effort.