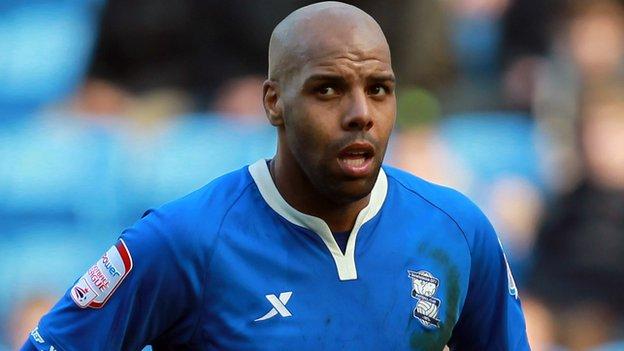 Birmingham City have parted company by mutual consent with striker Marlon King, who had one year remaining on his contract at St Andrew's.

The 33-year-old, Blues' top scorer for the past two seasons, joined the club from local rivals Coventry City in June 2011 when he signed a three-year deal.

It was due to run until next summer but, after agreement between the two parties, it has now been terminated.

And King will be available as a free agent when the transfer window closes.

King of the Spion Kop

The Dulwich-born player, who has been called up to the Jamaica squad for their forthcoming World Cup qualifiers against Panama and Costa Rica, has so far not figured for Blues this season, as the cash-strapped Championship club look to offload him from their wage bill.

King was first told that he was free to talk to other clubs at the end of last season because of the club's financial predicament, with the Blues having admitted that they were keen to cut their wage bill to comply with Financial Fair Play regulations.

But he will now have to wait until after the transfer window shuts in England at 23:00 BST on Monday before making his next move - to what would be his 11th club.

After starting his career at Barnet in 1998, King has clocked up 166 goals in a total of 492 appearances with Gillingham, Nottingham Forest, Leeds United, Watford, Wigan Athletic, Hull City (loan), Middlesbrough (loan), Coventry City and latterly at Blues.

King was out of the game for more than a year after receiving an 18-month sentence in October 2009 for sexually assaulting a woman in a London club.