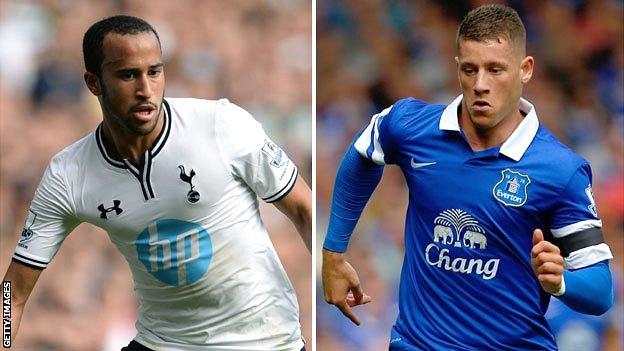 The uncapped duo of Everton midfielder Ross Barkley and Tottenham midfielder Andros Townsend have been called into the England squad for the World Cup qualifiers against Moldova and Ukraine.

England coach Roy Hodgson said: "We want to win. Players like Barkley, Townsend and Sterling can make a difference."

Southampton striker Rickie Lambert is retained after scoring on his debut.

"Hodgson was impressed with Ross Barkley, 20 in December, at St George's Park recently when he took charge of the U-21s for their recent 6-0 win against Scotland.

"The powerful Barkley has recovered from serious injuries earlier in his career and shown a new maturity this season. He scored an outstanding goal in Everton's opening day draw at Norwich City and confirmed that good impression when Hodgson watched him in Saturday's goalless draw against West Brom.

"Everton manager Roberto Martinez spoke briefly to Hodgson as he left Old Trafford on Monday night - and maybe Barkley's name was on the agenda.

"Andros Townsend is rewarded for his development but there is no place for Aston Villa's Gabriel Agbonlahor, heavily backed in some quarters, as his former team-mate Ashley Young returns to the squad."

Barkley played for England at the Under-20 World Cup and caught the eye with a 20-yard goal at Norwich City on the opening day of the Premier League season.

Townsend, who impressed during a loan spell at Queens Park Rangers last season, is selected three months after being punished by the Football Association for betting breaches. He subsequently pulled out of the squad for the Under-21 European Championship to undergo counselling.

When asked about the inclusion of Barkley, Hodgson said: "He impressed me when I worked with him at St George's and at Sheffield Wednesday, and quite a few other people impressed at that that time - Raheem Sterling and of course Andros Townsend, who was on the radar before the Under-21s.

"In choosing these players we are giving ourselves a chance to look at players who are capable of having a bright future.

"They can be players who make a big impact and help you to win. They're there on merit.

"But players need to understand the doors open at senior level, but you don't close the door on under-21."

Forster comes in for West Brom's Foster, who is ruled out for up to 12 weeks after breaking a bone in his right foot against Everton on Saturday.

"It's a great pity as he's been in extremely good form and he's our number two goalkeeper," Hodgson added, "but we have to accept it and wish him well."

England take on Moldova at Wembley on 6 September, before travelling to Kiev to face Ukraine on 10 September.

Hodgson's side are second in Group H, two points behind Montenegro with a game in hand. England also face Montenegro at Wembley on 11 October and Poland at home on 15 October.

The winners of each of the nine groups qualify automatically with the best eight runners-up contesting play-offs over two legs to determine four more qualifiers for Brazil 2014.