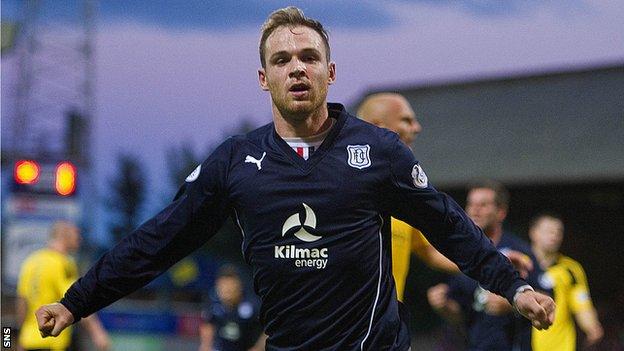 Dundee eased to victory over struggling Livingston to move to within two points of Scottish Championship leaders Hamilton Academical.

There was little to choose between the sides until Carlo Monti put Dundee ahead from the penalty spot in the 33rd minute.

Martin Scott had been penalised for a foul on Gary Irvine.

Declan Gallacher headed the second after 58 minutes and Peter MacDonald fired in with seven minutes remaining.

After Gallacher headed in a Jim McAlister corner, Livingston were denied by the woodwork after the ball pinged around the home side's box.

Visiting substitute Daniel Mullen was denied a goal by a last-ditch tackle before Dundee made it 3-0 when Mike Mampuya was caught in possession and, from Nicky Riley's cross, MacDonald completed the scoring.

Defeat leaves Livingston second from the bottom of the table and still waiting for their first league win of the season.