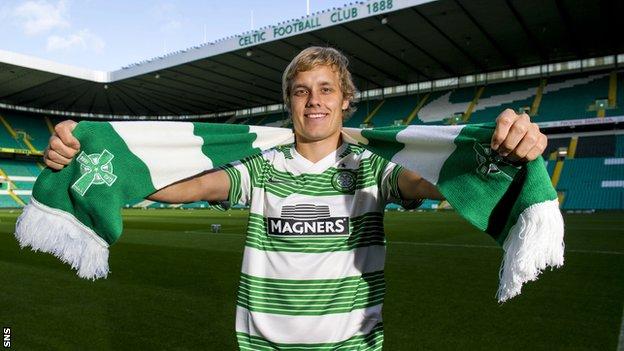 The 23-year-old joins the Scottish champions from German side Schalke, who he joined in 2011, having previously featured for Sevilla and Helsinki.

"This is a big opportunity for me and I'm really happy to be here," said Pukki. "It's my job to score goals and I want to show them I can do it.

"I want to win the championship and it'll be great to play in the Champions League. It will be a great experience."

Pukki has scored six goals in his 24 international appearances.

"He's a player we've liked for quite a while," Lennon said. "We like his style of play, I think he'll suit us. His first touch is excellent.

"He's a similar size to Gary. He may not bring the weight of goals Gary did but I know for a fact he'll make us a better team.

"I watched him against Slovenia a couple of weeks ago in Finland and he was excellent - and that's at international level.

"He can play the lone striker, he can play with a partner. He's got so many facets to his game."

Having had their initial approach rebuffed, Celtic's hopes of landing the forward appeared to fade when Schalke's Dutch international striker Klaas-Jan Huntelaar sustained an injury.

Last season's top scorer Hooper as well as midfielder Victor Wanyama and defender Kelvin Wilson have been sold by Celtic this summer.

But on Friday, also on a four-year deal, with Amido Balde, Derk Boerrigter, Steven Mouyokolo and Virgil van Dijk having moved to Celtic earlier this summer.