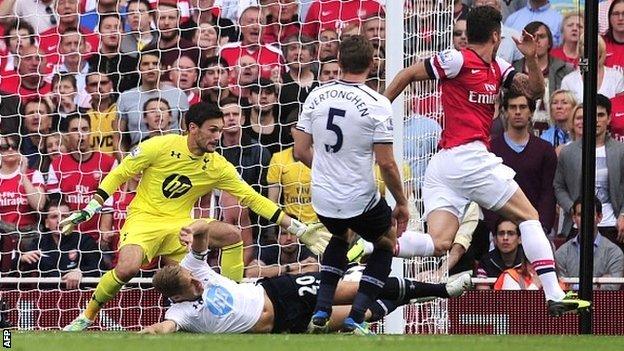 Arsenal continued their fine home record against Tottenham by handing their north London rivals a first defeat of the season.

Olivier Giroud scored his fourth goal this term when he tucked in Theo Walcott's low cross at the near post.

Andros Townsend had a shot saved in an open start, while Hugo Lloris denied Giroud and Walcott after the break.

There was one worry for Arsenal fans as midfielder Jack Wilshere came off before half-time but Arsenal boss Arsene Wenger said afterwards it was illness rather than injury that prompted the 21-year-old's withdrawal.

That will potentially be a relief to England boss Roy Hodgson, who has two upcoming World Cup qualifiers, starting on Friday.

This absorbing encounter lacked the high-scoring of the 5-2 victories the Gunners have enjoyed over Spurs for the last two seasons. But a fourth consecutive win since they lost to Aston Villa on the opening day was a perfect response from the Gunners to taunts about Arsene Wenger's lack of spending compared with Spurs manager Andre Villas-Boas.

Tottenham have only won once at Arsenal since 1993 and, despite creating several good openings, it was Arsenal who enjoyed the more clear-cut opportunities, Santi Cazorla twice showing his invention from clever free-kicks early on.

Villas-Boas has spent close to £105m on new players this summer but while his side look powerful, they were often lacking the speed of an Arsenal team with more Premier League experience - and it was an illustration of what they might miss without Gareth Bale, who has completed his move to Real Madrid.

There have been 125 goals scored in Premier League meetings between Tottenham and Arsenal, more than any other fixture.

The first-half goal that won the game was a case in point as the ball was swept out to Walcott on the right, the Tottenham defence misjudging their attempt to move up and catch the Gunners attack offside, and the England winger crossed low for the darting Giroud to poke in at the near post.

Arsenal also came close to adding to that goal when some sharp interplay led to Walcott bursting into the inside right channel but the advancing Lloris came out to thwart him on the edge of his penalty area with an expertly timed tackle.

Wenger's team, looking comfortable, were then deflated as Wilshere was withdrawn, to be replaced by new signing Mathieu Flamini making his first Arsenal appearance since April 2008.

Tottenham were more energetic and had more of the ball after the break. They had a penalty appeal when Laurent Koscielny made contact with Roberto Soldado in the penalty area.

But it was the hosts who again carved out the better openings as they struck on the break, Giroud drawing a superb stop from Lloris after his shot was deflected by Danny Rose. The French goalkeeper also denied Walcott twice, substitute Nacho Monreal making a hash of the follow-up from the second of those chances.

Defoe was introduced after 69 minutes and had a deflected effort superbly stopped by Szczesny and new Spurs signing Erik Lamela came on for his debut as Spurs pressed for the equaliser.

The visitors were not helped by a nasty ankle injury suffered by midfielder Etienne Capoue, and although at one point Villas-Boas sprinted down the touchline to urge his team on, they looked short of the extra spark that Bale so often provided last season.