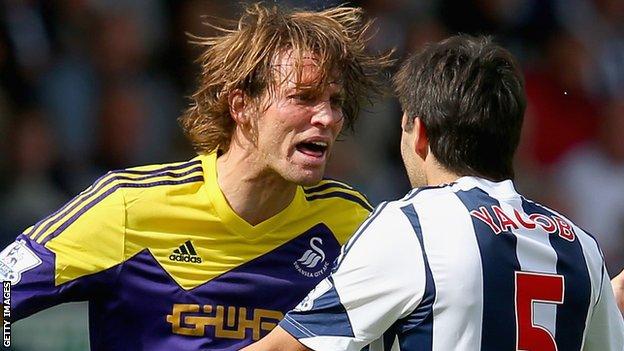 A goal in each half from Ben Davies and Pablo Hernandez secured Swansea's first Premier League win of the season while West Brom have yet to find the target.

Davies scored only his second-ever goal for the Swans with a thunderous volley, before Hernandez netted his first for the club from close range.

The returning Nicolas Anelka went closest for the hosts before the break.

Both teams went into the game on the back of some poor form, with West Brom having won only one of their last 11 Premier League matches and Swansea winning just two of their previous 13.

Michael Laudrup's men, who finished ninth last season, were unlikely to have been overly concerned about defeats by Manchester United and Tottenham in their opening two games.

Albion, on the other hand, are now without a home win since 9 March and have yet to score in the league this season.

Their latest defeat at The Hawthorns comes after a home reverse to Southampton and a goalless draw at Everton.

Anelka, returning from compassionate leave after the death of his friend and agent Eric Manasse, looked bright in a three-man attack for the Baggies but was unable to boost their firepower, while Scott Sinclair - on loan from Manchester City - struggled to make an impact on his full league debut.

With the transfer window shutting at 23:00 BST on Monday night, West Brom boss Steve Clarke might now be tempted to look for extra options in attack.

Swansea fully deserved their victory. Michu, last season's top scorer, fired over the bar from the edge of the area early on as he looked for his first league goal of the season, before Wayne Routledge curled a shot at West Brom goalkeeper Boaz Myhill.

West Brom's last home win in the Premier League was a 2-1 victory over Swansea on 9 March.

Since then they have only won one of their last 12 league games.

The home side should have been ahead on 17 minutes, but Sinclair's free-kick was headed horribly wide by the unmarked James Morrison from eight yards.

At the other end, Anelka was still looking lively and should have levelled on 31 minutes after racing on to Shane Long's through ball but, with just goalkeeper Michel Vorm to beat, his low angled drive went inches wide.

Enjoying their first lead in the league this season, Swansea should have doubled their advantage just minutes after the restart but, having been put through on goal by Michu's pass, Routledge's poor touch allowed Myhill to block.

The Hawthorns crowd were growing increasingly frustrated with their side as Routledge again wasted an excellent chance to double the visitors' lead, shooting tamely at Myhill with only the goalkeeper to beat.

But the Swans' victory was finally secured when Hernandez, who had just hit the crossbar, fired home from close range on 83 minutes following good approach play by Michu.

"Disappointing. Another home game where we have not scored. It is not a good way to start the season.

"I thought we played a lot of good football, probably the best football we have played for a while. Swansea did not create a lot either. It was a possession game; the first goal was crucial.

"It is a long season. We have to try to improve what we have done so far. We have to create more chances.

"I know there are people at the club working hard to make deals happen. Time is short but hopefully before the window closes they will have some fresh blood. We are after forward players as much as possible."

"A very, very important win. An away win, a clean sheet and the way we did it was perfect. After two very difficult games it was so important to get something.

"In the second half we have really dominated the game. I think we could have scored a couple more goals. We had some great chances.

"I was thinking 'are they going to equalise?' but fortunately they didn't and we won the game with a very good performance.

"One striker I think will come in, no-one out. I think it will be finished tomorrow."