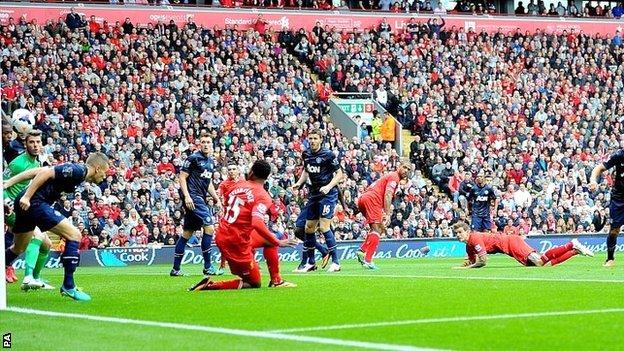 Liverpool secured their best start to a Premier League season since 1994-95 with victory over champions Manchester United at Anfield.

Daniel Sturridge celebrated his 24th birthday with his third successive winner of the season by steering in a close-range header in the third minute.

Moyes hoped for better luck with United after 12 games without victory as Everton manager - but his team came up short despite enjoying plenty of possession in the second half after being outplayed before the break.

The visitors were without Wayne Rooney after he suffered a head wound in training, which also keeps him out of England's World Cup qualifiers against Moldova and Ukraine. How they missed his creativity.

Robin van Persie squandered United's best chance late on but otherwise it was a relatively comfortable afternoon for Liverpool's new goalkeeper Simon Mignolet, who has yet to concede a Premier League goal since his £9m summer move from Sunderland.

And it was a fitting victory for Liverpool as Anfield celebrated the 100th anniversary of the birth of their legendary Scottish manager Bill Shankly.

As for United, this was a performance lacking in inspiration, purpose and threat and once again underlined the urgency for transfer business to be done in the closing hours of the transfer window.

Everton's Marouane Fellaini looks one certain arrival but Moyes, who also saw United held to a draw by Chelsea at Old Trafford on Monday, needs even more of a spark in a midfield that looked laboured by this team's standards.

Having suffered the loss of Rooney just as he had returned to the fold, Moyes' mood will not have improved as Liverpool took the lead in the third minute. Ashley Young's ill-advised attempt to dribble out of danger ended in a corner and when Steven Gerrard's delivery was headed goalwards by Daniel Agger, Sturridge deflected it home from virtually on the line.

United's initial response was bright, with Young's corner drifting untouched across the six-yard area and Van Persie just unable to keep an overhead kick down.

Moyes was forced into a first-half reshuffle when Phil Jones, watched by England manager Roy Hodgson ahead of World Cup qualifiers with Moldova and Ukraine, limped off and was replaced by Antonio Valencia.

But as the half progressed, Liverpool's pressure and high-tempo passing game increased United's frustration and it threatened to boil over on the stroke of half-time when Van Persie, who had already been booked, was involved in angry verbal exchanges with several Liverpool players, particularly Gerrard.

United began with more purpose in the early phase of the second half and Liverpool were grateful for Glen Johnson's crucial block from Young's goalbound shot.

It was the disappointing Young's final contribution as he was replaced by Nani shortly after Liverpool had introduced Raheem Sterling for Iago Aspas.

United were having more possession but a sign of the effectiveness of Liverpool's defence was that it took the visitors 76 minutes to force Mignolet into serious action, when he dived to punch away a shot from substitute Nani.

There was another worry for Liverpool, and watching England boss Hodgson, when Johnson limped off with 13 minutes left.

Van Persie wasted United's best chance with three minutes left when he was played in by substitute Javier Hernandez but could not find the target with an angled finish.