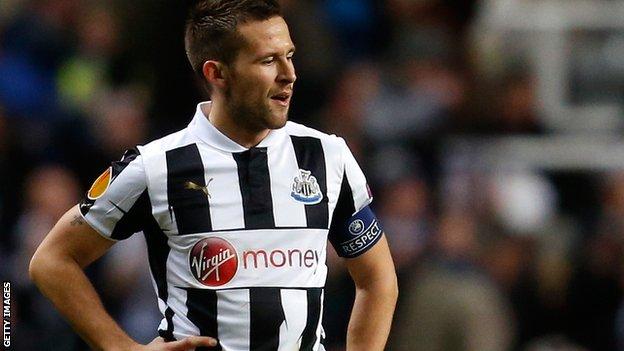 Newcastle midfielder Yohan Cabaye refused to play in his side's 0-0 draw at home to West Ham on Saturday following a £10m bid from Arsenal.

"It is quite simple - we need to resolve the situation," said Alan Pardew.

"We need to get ourselves in a position where if he stays, great, and if he doesn't stay we need to get someone equally as good."

Cabaye, 27, travelled with the squad for Monday's fixture at Manchester City, but left before the 4-0 defeat after his club had received what they called a "derisory" offer from the Gunners.

"There should be business from us, business that is right for Newcastle where our fans get in a position where they really want to believe in the team," Pardew said. "It's difficult at the moment. We have big clubs filling our players with disharmony.

"If it is a situation where he leaves the football club, we have got to be stronger. That's my aim when the window shuts."

Cabaye has made 73 appearances for Newcastle since joining from Lille in June 2011 and made his top-flight debut against Arsenal in a goalless draw.