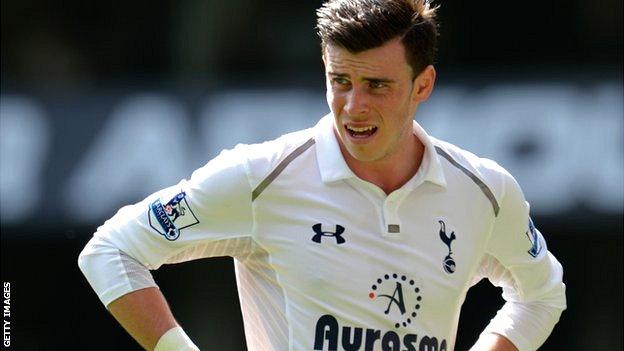 Real Madrid have made two different offers for Wales winger Gareth Bale and are waiting to see if Tottenham Hotspur will accept either one.

The first offer is 100m euros (£86m) with structured payments over three to four years, which would surpass the world record fee Real paid Manchester United for Cristiano Ronaldo (£80m).

The other is an up-front, one-off payment which will be closer to £70m.

A player could also be thrown in as a makeweight in the second deal.

And if that happened it would also make that deal more valuable than the one Real paid United for Portugal winger Ronaldo in 2009.

Wales international Bale, 24, is determined to join the Spanish club, who have been in advanced talks with Spurs for several weeks.

If there is no announcement on Saturday it is unlikely there will be one until Tuesday because of the away match Real are playing on Monday night against Granada in the Spanish top flight, La Liga.

The plan remains to unveil Bale in the middle of next week, but this now depends on Spurs.

Bale, who joined Spurs in a £10m deal from Southampton in 2007, was named as the player of the year by both the Professional Footballers' Association and Football Writers last season after scoring 26 goals for the White Hart Lane side.

Madrid have already spent in excess of £50m this summer, bringing in Spanish midfielders Asier Illarramendi from Real Sociedad and Malaga's Isco for £34m and £23m respectively.