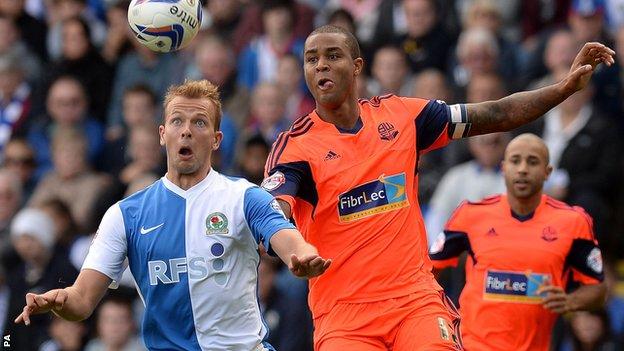 Midfielder David Dunn, 33, opened the scoring with a brilliant solo effort before Rhodes added a second a minute later from the edge of the area.

Alex Baptiste's powerful drive from inside the box just before the break raised the visitors' hopes.

But Corry Evans' strike put the game out of Bolton's reach, before Rhodes' close-range finish wrapped up the win.

After contributing 29 goals last season, Scotland international Rhodes - who netted twice in Blackburn's 5-2 win at Barnsley a week ago - has already scored four times this campaign.

Jordan Rhodes's four goals so far this season takes his career total to 127 in 230 appearances. He has not scored less than 20 goals in a season since the 2008/09 campaign.

Rovers fans face the prospect of a nervy transfer deadline day on Monday.

Meanwhile, the defeat for Bolton - one of the early season favourites for promotion - leaves Dougie Freedman's side still looking for their first win.

Blackburn were certainly good value for the three points, but it could have been a very different encounter had Bolton's Jermaine Beckford showed more conviction with the first real chance of the game.

The former Leicester City striker, a summer signing for Wanderers, was put through on goal but he could only shoot tamely at Blackburn keeper Jake Kean.

The visitors were punished for that missed opportunity soon after as a moment of magic from Dunn gave Blackburn the lead.

The lively Josh King led a swift break before playing the ball to the feet of Dunn on the edge of the area. The former England international sidestepped two challengers to put himself through on goal, and he made no mistake with his finish.

Blackburn fans were still celebrating that goal when Rhodes made it 2-0 barely a minute later. Dunn this time provided the assist, passing to Rhodes in space on the right and the striker got the better of Bolton skipper Zat Knight before drilling a low effort into the net.

Debutant Ben Marshall struck the post as Blackburn looked to kill the game off, but Bolton grabbed a lifeline just before the break when David Ngog's smart pass sent Baptiste clear and the defender rifled home.

Bolton emerged from the tunnel in the second half with renewed vigour and Ngog was denied an equaliser by Todd Kane's clearance off the line.

The visitors pressed forward after that chance but all hopes of snatching a draw were ended when Bolton failed to clear and Evans smashed a volley into the top corner.

Victory was sealed late on when Kane picked out Rhodes inside the area and the striker had the simple task of tapping in from close range.

"Jordan Rhodes is very important to us. He proved again what a quality finisher he is. It is not just his goals but also his work rate.

"When I first took the job I asked the owners about Jordan Rhodes and they said he was not for sale. As soon as 23:00 BST comes on Monday you will have to talk about something else. He is better than a £10m player for me. He is a goalscorer.

"I thought we were very clinical today again and we might have had a couple more in the first half. Their goalkeeper made a couple of outstanding saves."

"Individual mistakes cost us dearly. At 2-1 at half time we had opportunities to make a game of it. All in all I'm disappointed in the result and the individual performances.

"We are only five games in. We have had a tough sequence of games but we have to look forward.

"We have to try and recruit which is difficult. We have to bring in a certain type of player who shows enough hunger for this football club."