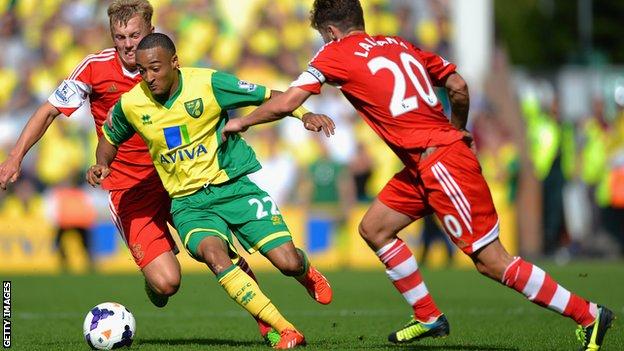 Redmond, 19, scored the winner when he cut in from the left wing, created some space and fired a low shot past goalkeeper Artur Boruc from 20 yards.

Southampton had earlier had a strong penalty appeal turned down and captain Adam Lallana was unlucky to hit the post with a fine left-footed volley.

But Redmond's strike gave Norwich their first Premier League win of the season.

The result ended Southampton's unbeaten start to their campaign but they will feel aggrieved at not being given a first-half penalty when Lallana's shot hit Bradley Johnson's raised arm.

The visitors were also unfortunate not to take the lead as Lallana's effort hit the woodwork, before Dani Osvaldo, making his full debut after a £15m move from Roma, was twice denied by Norwich goalkeeper John Ruddy.

Norwich have finished 12th and 11th since winning promotion from the Championship in 2010-11 and spent more than £20m strengthening their squad this summer.

"It was a fantastic goal from Nathan Redmond and nobody deserved it more as he had been a constant threat from the first moment.

"But another name to look out for is Leroy Fer, who was a very big presence for Norwich in their midfield.

"It was Norwich's first win of the season and Southampton didn't play badly but didn't do enough."

The signing of Netherlands international attacker Ricky van Wolfswinkel, an £8.5m summer buy from Sporting Lisbon, was their most expensive transfer, but the addition of Redmond, a £3.2m purchase from Birmingham, looks a shrewd move by boss Chris Hughton.

After taking only one point from their opening two games, and with clashes against Tottenham, Chelsea and Arsenal in three of their next five matches, Norwich were in need of victory.

They made a bright start and nearly capitalised on an error from 18-year-old Saints midfielder James Ward-Prowse, who earlier this week was called up for the England Under-21 squad for next month's Euro 2015 qualifiers against Moldova and Finland.

In front of new England Under-21 boss Gareth Southgate, Ward-Prowse was dispossessed 35 yards from goal and Redmond ran unchallenged to the edge of the penalty area but dragged his effort narrowly wide.

Van Wolfswinkel's flick-on from a free-kick found Leroy Fer, whose effort was parried by Boruc and Johan Elmander, making his first league start for the Canaries since joining on a season-long loan from Turkish side Galatasaray, failed to hit the target from inside the six-yard area.

But the Saints enjoyed a spell of domination either side of half-time with Lallana hitting the post before Osvaldo's shot on the turn forced a fine save from John Ruddy, who then blocked an 18-yard effort from the Italian.

Then, in the 69th minute and against the run of play, Redmond's strike put Norwich ahead.

Both of Southampton's Premier League goals this season have come at the death, but they could not force an equaliser at Carrow Road as Norwich secured three precious points.

"At this stage of the season we are just delighted with the win. We had got a very good point against Everton, but then it was disappointing when we lost against Hull so it was important we got the three points.

"Nathan played very well and we are getting together a good team. His form at the end of last season was very good for Birmingham and he has managed to continue that here.

"Southampton have some very talented players and spent very well in the summer so they are always a threat."

"Overall it was the kind of game we expected and there were chances for Norwich and for us throughout the game. We had some clear chances and that's the most frustrating part of the game, that were able to score and we weren't.

"It was a clear penalty and we aren't having much luck in terms of fairness with calls from referees. It is unfortunate."