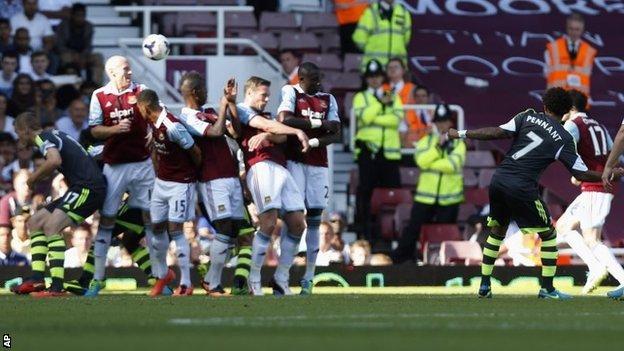 The substitute's curled effort was enough to give Mark Hughes's side their second consecutive Premier League win.

Jussi Jaaskelainen had kept Stoke at bay with a fine double-save in the first half but could do nothing about Pennant's effort as his side conceded their first league goal of the season.

Simon BrothertonMatch of the Day commentator
Not a game to linger long in the memory, but brightened by one spectacular moment from Jermaine Pennant with a superb free-kick having come off the bench to give Stoke City their second win of the season.

The defeat was also the Hammers' first at home since February.

Visiting boss Mark Hughes will feel reasonably content as he takes stock of progress before the break for a round of World Cup qualifiers.

Having succeeded Tony Pulis in the summer and lost his first competitive match in charge, at Liverpool, the Welshman has now guided Stoke to a pair of solid wins in the league.

And although the Potters had to absorb some early pressure at Upton Park, they then created the majority of chances in a largely disappointing encounter.

Sam Allardyce's side rarely threatened the visitors' goal and, having failed to score in their last two league matches, will be keen to see injured striker Andy Carroll return to action as soon as possible to add some menace up front.

The visitors made most of the running in a colourless first half, Jaaskelainen keeping out a long-range volley from Marc Wilson before reacting smartly to block Jon Walters' immediate follow-up from inside the area.

Kenwyne Jones wasted an opening early on when he shot over the bar, while Steven Nzonzi failed to capitalise on a mistake by Mark Noble and pulled a poor shot wide after homing in on the home side's area.

For the hosts, striker Modibo Maiga failed to get on top of a Matt Jarvis cross and saw his header skim wide - his side's best chance before the break.

The second half followed along similar lines, a combination of both poor execution and good defending ensuring the stalemate continued.

Erik Peters and Charlie Adam failed to deliver threatening crosses when given the chance, while the impressive James Collins denied Matthew Etherington a shooting opportunity against his old club just outside the Hammers' box.

Nzonzi drilled another shot a long way wide for Stoke, while Winston Reid hooked a volley over the visitors' bar with 20 minutes remaining.

But with the game threatening to peter out, two substitutions by Hughes proved the catalyst for the goal that won the match for Stoke.

Glenn Whelan, who had replaced Adam on 76 minutes, won a free-kick just outside the West Ham area and Pennant, on for Etherington, whipped the ball over the wall and into the corner of Jaaskelainen's net.

The goal briefly spurred West Ham into action, but Stoke held on with some comfort.

Stoke manager Mark Hughes: "Jermaine has been excellent since I came to the club. I've always admired his talent, but he's had his own problems and will tell you that himself.

"When I came in and there was a real possibility he could leave the club, I felt like I couldn't allow that to happen. You don't want him turning up at Stoke in a different shirt.

"His work's good and you don't score a goal like he did without putting extra work in on the training ground, which he does every single day."