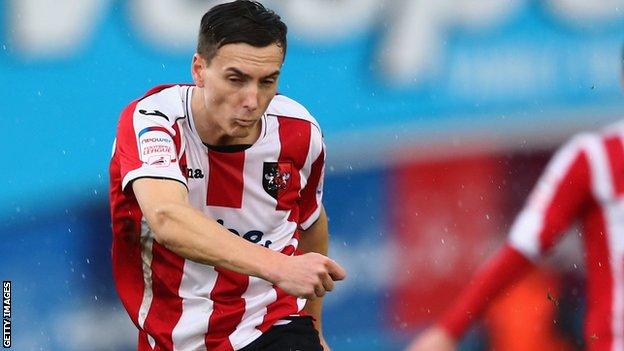 Alan Gow came off the bench to score twice for Exeter in a win against York.

The visitors led when Ryan Jarvis tapped in from close range after Artur Krysiak had saved well from Craig Clay.

The Grecians levelled when Gow was put through on goal within 15 seconds of coming on to the field and coolly slotted his first-time left-footed shot into the right-hand corner.

The Scots' winner was a piledriver from 25 yards that gave Michael Ingham no chance in the York goal.

"There was commitment, energy, there was a lot of good quality stuff in there so from that point of view for an away performance, excellent.

"The two goals are where the mistakes have been made, they have not stayed with the runner in the first one and the second one we've not come out to close the ball down quickly enough which entices the lad to shoot and the ball beat Michael Ingham in goal.

"But we were creative we got the balls in the box which I'm very pleased about over the course of the last two games.

"It's just a case of keep doing what were doing and hopefully we can cut out the goals against and get one or two more for."