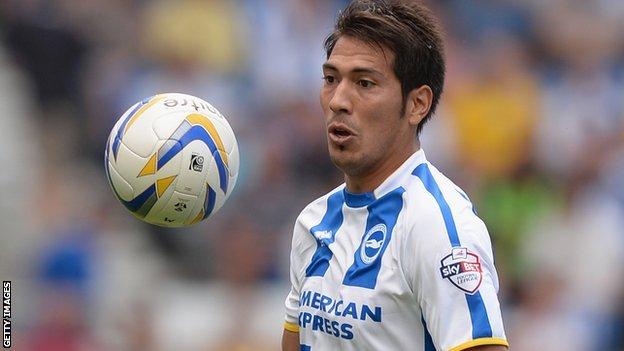 The Lions, who had lost three of their opening four league matches, went ahead when Martyn Woolford collected a pass from Richard Chaplow and fired home.

But Millwall then had Alan Dunne dismissed for two bookable offences.

That goal prevented Millwall boss Steve Lomas from gaining his first league victory in charge of the London club since leaving Scottish side St Johnstone in the summer.

Neither side created much in the first half, but it became a more entertaining contest after the break with Millwall scoring in the 51st minute.

Andrew Crofts missed an opportunity to make it 1-1, curling an effort just wide, before Lions striker Woolford had a low shot saved by Tomasz Kuszczak following a pass from Scott McDonald.

But the visitors were then reduced to 10 men 14 minutes from time when Dunne received his second yellow card for bringing down Orlandi.

And Millwall could not hold on to the victory that would have taken them out of the Championship bottom three.

Ulloa, who had put the ball in the net earlier in the match but seen the referee disallow it for a push, scored his fourth goal of the campaign to ensure the match ended in a draw.

"It's not easy to win consecutive games at home, or consecutive matches, but in the second half we played better than Millwall and deserved to score.

"If you don't win at home you are not happy, but we are improving. It will take time because the players are understanding the changes we are making.

"Now we have a period of time when we can hopefully get players fitter."

"The sending off was definitely the key part of the game and the turning point as we were comfortable.

"We set up to nullify Brighton who we gave due respect to after they won their previous two games. We deserved our goal and to come away with a draw is disappointing really because the players were superb."

"If we are to really, truly take this great club forward we need some fresh blood and there needs to be an injection of new faces.

"Too many players have become stale. Hopefully we can shift a few on and be creative."