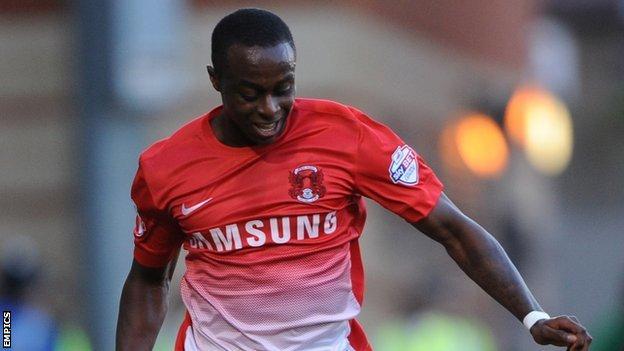 Kevin Lisbie scored against his former club as Leyton Orient beat Colchester to maintain their perfect record and best-ever start to a season.

David Mooney, who had a loan spell at the U's in 2010-11, fired the visitors ahead from close range.

Colchester levelled against the run of play when Jabo Ibehre fired past Jamie Jones from just inside the area.

But Lisbie then headed the O's back in front and they held on to claim their fifth consecutive win this term.

The victory was also Orient's first at Colchester since 1951.

"I was just thinking about trying to galvanise the boys and to get a win. It was a tough game obviously. It was going to be our toughest game on the back of the 120 minutes that we had on Tuesday.

"Our in-form strikers, they're in the form of their lives at the start of the season, which is what you both want.

"They've both got five, and they're looking so potent at the minute it's frightening."